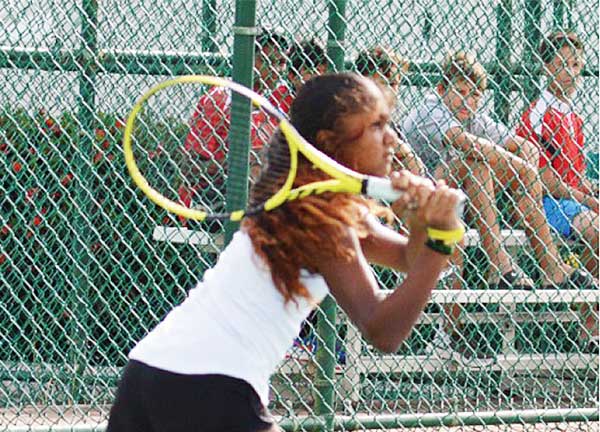 ANTIGUAN Sibley Charles seeded at No. 2 maintained her good run on form to beat Trinidadian Cameron Wong 6 -2, 6 – 3 to capture the ladies singles title in the International Tennis Federation (ITF) and the Confederation of Tennis of Central America and the Caribbean (COTECC) championship played at the National Tennis Centre in Beausejour on Thursday 15th August 2019.

The championship organized by the Saint Lucia Tennis Association was sponsored by Sagicor.

Charles, recovering from her slow start due to strong wind gusts of up to 30 mph which lasted throughout the match, made light work of Wong despite the Trinidadian putting up a fight; with some powerful forehand shots which Sibley had difficulty in returning.

Following the encounter, the VOICE spoke to Wong about the match and what was it like playing in such windy conditions. This was her reply: “It was impossible to play tennis; I don’t think I’ve played tennis in worse conditions than this today. It was really windy around the court; I couldn’t serve, or toss the ball. I couldn’t adjust. It was hard to track the ball because it was moving so much.”

Wong will be in COTECC action this weekend in Trinidad and Tobago and is hoping to continue her form throughout in better conditions.

Overall, in terms of the just concluded tournament she said, “The tournament was a good one; the standard of play was at a very high level. There were a lot of good players and I really had to work hard to beat them because it was very challenging.”

Efforts in trying to get the ladies champion Sibley Charles to say a few words proved futile, but she promised the VOICE in 2020 when she returned to defend her title at the NTC, that she would be ready as she is working hard to get out of her shyness.

In the boys Under 14 finals, it was an all Guatemala derby between Gabriel Porras seeded at No. 4 and Rafael Botran. Porras defeated his compatriot Botran 6-0, 6-3.

There was a glimmer of hope for Botran to make a comeback midway into the second set after having Porras 3-0 down. Porras was complaining to the Umpire about pain in his right arm, and was later treated by the medical team. When play resumed he quickly moved into high gear from 3-0 down to defeat Botran 6-3.

The awards were as follows: