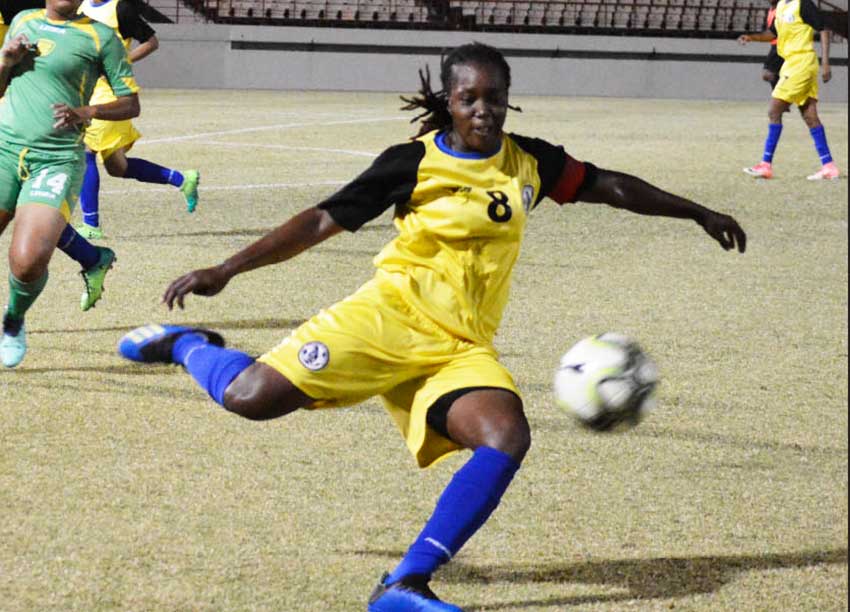 After finishing in third place in 2018, the Saint Lucia National Senior Women’s Football team is just one win away from securing the top spot at the 2019 Windward Islands Football Association (WIFA) Tournament currently taking place at the Daren Sammy Cricket Ground.

Saint Lucia can go on to win the trophy for the first time in its history after beating Dominica 3-2 on the opening night (Tuesday 2nd) and defeating Saint Vincent and the Grenadines 1-0 on Thursday in the “Battle of the Saints”. The goal scored was by way of a penalty by the captain Elliasia Marquis. The game was physical and marred by poor officiating.

Also on Thursday evening, in the first encounter, Grenada and Dominica played to a 1 – 1 draw. The two teams lost their opening games on the first night of competition to Saint Vincent and the Grenadines and Saint Lucia respectively.

With the final round of matches this evening and the championship at stake, for the host nation, they must first go out positive to beat the defending champions (Grenada) and secondly play for a draw.

Team Saint Lucia can use their latest victory in the way they played against Saint Vincent and the Grenadines as a springboard to win the competition come what may.

Speaking to the media after the game against Saint Vincent and the Grenadines,

Captain of the Saint Lucia team, Ellaisia Marquis said, “Some of the players were lacking focus, and were too excited coming into the game. We are hoping to get a victory, knowing that any team that is victorious will be closer to winning this year’s championship.”

She added, “Saint Vincent and the Grenadines was determined to win as they came all out firing, with both teams on three points, but at the end Saint Lucia nosed ahead.”

Saint Lucia’s coach, Trevor Anderson admitted, “Our objective was to win the game, and to win the game the players had to follow the objective in terms of the compactness in midfield, team shape, move forward as quickly as possible, press on and cover up, and that is what got us through.”

He continued, “In terms of bringing in Vionce Weeks (substitute), our system is 4-3-3 but we had to change that by adding another striker to put pressure on Saint Vincent and the Grenadines’ defence, and that is what got us through.”

Below is the full interview with the Captain of the Saint Lucian team, Ellaisia Marquis and Coach, Trevor Anderson:

What are your thoughts on the officiating of the matches?

Ellaisia: I don’t even know what to say; probably the aggression that we had in the game, the referee did not like, but always remember the referee’s decision is final.

You have seen Grenada play. What are your thoughts going into this evening’s game against the defending champions?

Ellaisia: Even if we have seen them play, we should never under estimate a team because football is always on the day. We have to come to the game with the same determination like our two previous games.

Are there any injuries going into this all important encounter tonight?

Anderson: Let’s just say it’s a good thing we have a physiotherapist. If wasn’t for that, most of our better players would not be playing – she has done a marvelous job!

What is your take on the crowd support thus far?

Anderson: After winning two games, I simply hope the Saint Lucian public will come out this evening to support us going forward to winning the championship.