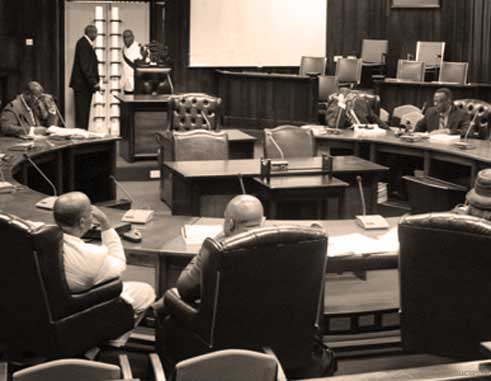 In my early teenage years, a close friend of the family who saw my interest in the politics of the day took me to listen to meetings in the Marchand area. In those days the Labour Party kept their meetings at Mauricette grocery shop, which was located in an area next to Come to Me Tyre Service in Marchand. The UWP on the other hand kept their meetings just next door at Branford Grocery and rum shop. They also kept meetings at the corner of the Marchand and Chausee roads.

Both sides attracted large crowds. The sitting parliamentary representative for the area was the UWP’s Joseph Desir – T Jessee/ Little Jesus, as he was known. Peter Josie of the SLP was trying to unseat him.

One of the first things I remember about politics is Josie saying that one must beat his opponent at his own game. Therefore he Josie would go to rum shops if he had to, he would go to church if he had to, and he would definitely not miss a funeral in the constituency. He pledged to be everywhere Desir went.

Josie was by far the younger of the two; he was more charismatic and held back no punches. He had not too long before returned from University in Trinidad and Tobago and was buoyed by the black power movement which was sweeping the United States and the Caribbean. Desir was a goldsmith and a Castries councilor.

Josie had earlier teamed up (through the St Lucia Action Movement- SLAM, as it then was) with George Odlum, the extremely eloquent Oxford University graduate and former head of what is now the OECS Secretariat. George was a self proclaimed socialist who had close ties with Cuba. Together he and Peter Josie became one to the most potent political combinations in both local and regional politics.

The United Workes Party led by John Compton went on to win that 1974 election over the SLP, which was led by criminal law attorney Kenneth Foster, by 10 seats to 7 seats. Some said the result should have been 9 to 8 were it not for an incident, which supposedly led to the infamous ‘it will be alright in the morning’ statement. Peter Josie won his seat over Joseph Desir by 59 votes while George Odlum who ran the Castries South East seat was defeated by the first woman to hold a parliamentary seat in St Lucia, Mrs. Heraldine Rock, losing by 41 votes.

No sooner after that victory of the UWP, George Odlum and Peter Josie decided to continue campaigning and to champion the cause for the education and development of the masses. To them (as they saw it) it was a struggle to ultimately wrestle power from the hands of the imperialist and capitalist and to claim the productive machinery of the country, for the people of St Lucia.

They immersed themselves in the trade Union movement. Odlum became President of the Farmers and Farm Workers Union with its base in the Cul de Sac Valley, and Josie became the President of the Seamen and Waterfront Workers Union with its members predominantly stevedores of Castries. Over the next few years they led the charge for better working conditions and improved wages for workers. They helped organise a series of strikes to force the hands of employers and government. These were turbulent times.

The market steps which was the meeting headquarters of the SLP, was used extensively for meetings. Supporters of Odlum and Josie named it the University of the Market Steps because it was there many of the pertinent issues facing the country were discussed.

The ruling United Workers Party for its part continued with its agenda for the development of the country. Occasionally they too kept meetings at their meeting quarters on the William Peter Boulevard. The atmosphere towards them got increasingly hostile. However, the banana industry was striving despite the struggles of the smaller farmers and workers. To an extent the tourism sector was being established, roads were being built across the country and schools were also being constructed. But a vast number of many people believed we could have done better. They believed that the wealth being created was unevenly spread.

There was rampant discontent in the country. Many thought the pace of development was too slow. Others thought the upper class and more privileged persons benefited far too much at the expense of the working and poorer class. Others claimed that corruption was the order of the day and a lot more could be done to train our people for the challenges of a developing and changing world.

Odlum, Josie and later Louisy and Michael Pilgrim mobilized the people while Compton was trying to run the country. Compton wanted Independence for St Lucia but many became suspicious of its timing just before an impending election. Was he trying to gain a political advantage from the independence issue? This exacerbated the situation in the country and there were many strikes and demonstrations which often ended up with the police using tear gas to disperse angry crowds. The Civil Service and teachers striked for more pay. In fact, in 1978 to early 1979, St Lucia had its longest strike by the Civil Service and Teachers. The country was deeply divided.

St Lucia nevertheless attained independence from Great Britain on February 22, 1979. Three months later in May 1979, the St Lucia Labour Party won the election by 12 seats to the UWP’s 5. Both George Odlum and Peter Josie won their seats and Allan Louisy became Prime Minister of St Lucia.

Two significant things occurred thereafter, which would have a profound bearing on politics and governance of the country, then and in the future. Firstly, there were worrisome reports of an agreement between Louisy and Odlum whereby Louisy would serve as Prime Minister for a limited time not exceeding a year.

Secondly, the minimum age to enter the St Lucia Senate was lowered to allow a young dynamic teacher and President of the Teacher’s Union to become Minister of Education, thereby giving him requisite experience and a possible foothold on the political landscape of the future. That young man was Kenny D Anthony.