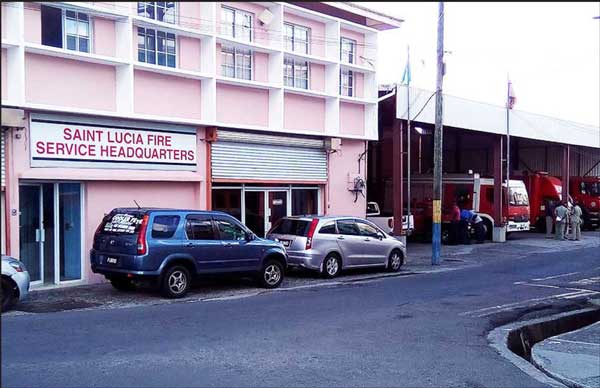 HOME Affairs Minister Hermangild Francis has accused firefighters of making the mistake of comparing themselves to members of the Royal Saint Lucia Police Force.

The accusation was made Thursday during a Senate meeting and days after firefighters returned to work from a week-long industrial action that saw government meeting several of their demands.

Francis said the comparison was unfair because every organization is special and unique in its own way.

“I want them to desist from doing this,” Francis said.

The Minister started his diatribe on the firefighters by first thanking those who manned the stations throughout the island while the majority were on strike. He then slammed firefighters for the manner in which they undertook the strike action that seemed to have forced government to act quicker than expected.

“It is the right of every (trade) union to fish for better conditions and salaries but we have to take into consideration the manner in which we do so,” Francis said.

His reproach of the actions taken by the firefighters went further by him saying that the fire service department was placed specifically and deliberately under the Protective Services Act.

“We know the fire service has been neglected and we need to pay particular attention to that entity but it is [unfair] on their part to say that governments, past and present, have not taken corrective measures to see that things get a little better for the fire service,” Minister Francis said.

He then spoke of the good both governments have done to improve working conditions of firefighters even going as far as pointing to the Labour administration’s efforts at constructing top of the line fire stations in Gros Islet, Dennery South, Micoud North, Babonneau and Vieux Fort at great expense.

Francis referred to $1.9 million sourced by his government to furnish the Babonneau fire station to enable it to open its doors to the community as well as the promotions of 50 firefighters and 80 being recruited into the service within the past two years. He added that four new ambulances had been added to the firefighting fleet just last year.

“We have been working to see conditions at the fire service department come to a standard where everyone is happy,” Francis said.

The Minister said government intends to work with firefighters. He felt there was need for the fire service to understand the importance of procedure, which he said was important in everything.

Francis related that he had not been pleased with the type of correspondence government had received from the Fire Service Association.

“To send a letter like this is in bad taste and should be condemned by everyone,” he said.
One of the Association’s demands, among several others, was for authorised drivers to be exempted from licensing fees on or before 1 April, 2019.

The committee has been tasked with developing and submitting to the Cabinet of Ministers within 30 days, an action plan showing implementation timelines for some of the Association’s demands.

The Home Affairs Minister said government has given its commitment to review policy and procedure regarding probationary employment in the fire service and to implement arrangements similar to what obtains in the Royal Saint Lucia Police Force.