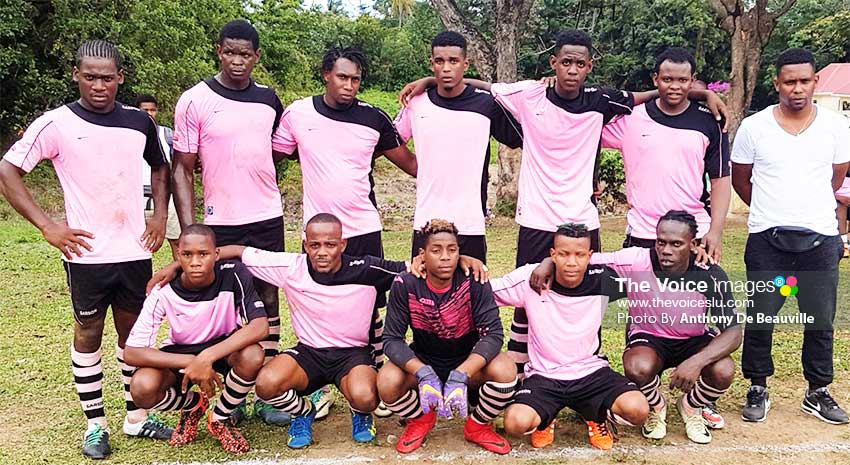 ITS day four and one game is on the cards this evening as the excitement continue in the 2018-2019 District Representative Cup sponsored by Allen Chastanet in collaboration with the Desruisseaux Football League.

One match was played on Tuesday evening (14th January) at the Desruisseaux playing field; El Ninos B defeated Diamond Ballers 2-0. For El Ninos, the goal scorers were Jessaniel Flavius in the 69th minute and Brent Willie in the 90th minute.

On Sunday 13th in a double header played at the Desruisseaux playing field it was mix fortunes on the opening day with Blanchard United defeating SLFA 1st division team TiRocher FC 1-0; while El Ninos A FC and DX United played to a 1-1 draw.

In game 1 which kicked off a little after 2.00 p.m. Blanchard United left nothing to chance when they played TiRocher FC, and for the many fans who turned out for the afternoon entertainment they never regretted coming as Blanchand United went on to defeat TFC 1-0, their first win against TFC in that competition.

The first half ended 0-0 as both teams squandered a number of scoring opportunities; Blanchard United must be thankful for the young custodian who came up with a number of spectacular saves between the uprights.

Following the break both teams up the tempo a few notches, but it would be Blanchard United that nosed ahead, when Tevin Joseph scored in the 47th minute, to the delight of their supporters.

Despite their 1-0 advantage Blanchard United never gave up as they continued to press on for another goal; TFC on the other end of the pitch were firing on all cylinders to save the embarrassment, but at the end of regulation time Blanchard United took home the maximum three points.

Following the match the VOICE spoke to Ali Vaval head coach for Blanchand United and this is what he had to say about the encounter. “Actually I feel good about the game; what you put in is what you get out, the guys have been in intense training. I see the result of the training because everything went as plan.”

Is there a rivalry between the two teams? “Vaval said,” The main players on the TiRocher team are from Blanchard, they know we are a nut to crack so it’s not going to be easy for them.”

Blanchard’s next encounter will be against Green Monsters from AnseGer and according to Vaval; they are looking forward to that game, but it is not going to be easy one.

In the second encounter, defending champions DX United took on El Ninos, and within 9 minutes into the game Darwin Bideau put DX United ahead; the pendulum swung from one side to the next in terms of ball possession and throughout the first half of play both teams squandered seven scoring opportunities as the half ended 1-0 with Referee Gordon Wilson in charge.

On the resumption there was no letting off by El Ninos and in the process caught DX United defence napping only to give Kurt Charles the opportunity for the equalizer in the 61st minute.

With 29 minutes remaining in the game both teams went at each other, the rivalry on the pitch was fiery, the crowd on the side line was enjoying it to the fullest, but Referee Wilson was not having any of it as he took control. The time was ticking away and so was the natural light as both teams were desperate for a final shot to goal in the hope of scoring the winner but to no avail as the game ended 1-1.