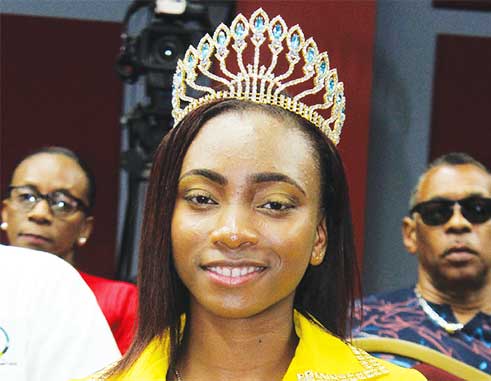 LAST year’s Independence Queen, 18-year-old Kurnisha Augustus from Dennery North, will soon be making way for her successor as the countdown begins for the 2019 Miss Independence Queen Show scheduled for the National Cultural Center February 15.

Augustus, who made an appearance at Thursday’s press launch of the country’s 40th Independence celebratory events, called on young people — like her — to hold on to their dreams, believe in them and work to accomplish them.

One of the coordinators of the show, Diane Felicien, said this year’s pageant will be one of the most anticipated shows out of the many scheduled for this year’s 40th Independence anniversary celebrations.

According to her, the show will be loaded with surprises, excitement and fun.

“This will be a pageant with a difference,” said Felicien.

Last year’s show was said to be quite a success.

The event has been growing in popularity over the years, especially now that communities are getting involved.

The Miss Independence Queen Show has been a fixture on the annual calendar of celebratory events for the observance of Saint Lucia’s Independence.

Felicien did not give out much details about the February 15 show, aside from her previous promises that lots of surprises, lots of fun and lots of excitement are in store for patrons.

Ten communities will be participating in this year’s show.

Saint Lucia will observe its 40th Independence anniversary on February 22, having gained nationhood in 1979.

The year’s Independence theme is: All In – Our Journey, Our Future.