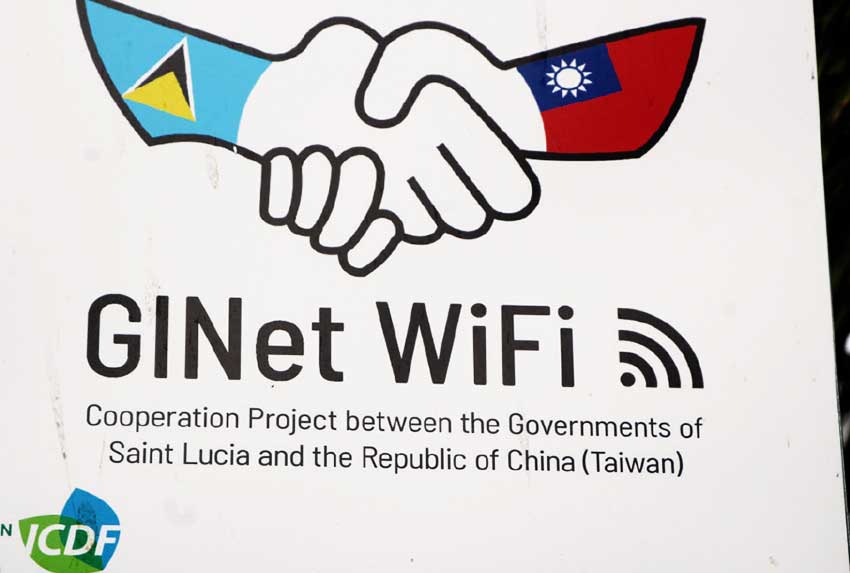 A US$ 4 million initiative geared at bringing Wi-Fi to communities across the country has been launched making Saint Lucia, from north to south, east to west a huge Wi-Fi Zone.

This incredible, yet significant accomplishment was recognized Wednesday at a ceremony in Constitution Park. The ceremony was also to recognize the City of Castries as the last of the communities within the island wide Wi–Fi Zone.

The other communities to enjoy such a privilege are Vieux Fort, Dennery, Micoud and Canaries. All told, Saint Lucians and visitors alike can get internet service in about 66 hot spots in 30 locations within the aforementioned communities.

With the expertise and financing provided by the Government of the Republic of China (Taiwan), the project, known as GiNet, will not only bridge the digital divide that exists in the country but also better place Saint Lucia in the world internet penetration ranking.
Here in Castries Saint Lucians and visitors could now access the internet in the area of government building on the waterfront, Serenity Park, the Sir Derek Walcott Square, in and around the Craft Market and Vendors Arcade, Constitution Park, Pointe Seraphine, the Cultural Center and other areas within the city’s shopping bloc.

This culmination of the island wide GiNet Network is expected to have a positive impact on Saint Lucians, visitors, businesses and the country on a whole.

This has prompted Castries Mayor Peterson Francis to describe the City of Castries as a smart city which will transform the way of life of Saint Lucians.

“We are digitally transforming into a smart city step by step,” he said noting that his office embraces the concept of smart cities because of the new way of life it delivers through technologies.

He believes that the GiNet project will not only reduce the digital divide in the country, but improve business transactions and meet the increasing expectations of residents, visitors and businesses.

“I hope this new GiNet Wi-Fi service within Castries will not only revolutionize the way Saint Lucians communicate and interact with each other…” Francis said.

Mayor Francis believes that Saint Lucia can be the telecommunications hub of the Caribbean however warns that for this to happened government and businesses must combine their efforts. He referred to the parking terminals already on island to be installed in the city as smart parking terminals and the idea of installing charging stations for mobile devices as projects that could transform Castries into a smart city.

“Let us introduce technology to further the empowerment of our people,” was his call to the government.

The government and people of Taiwan were profusely thanked by the government for not just expanding internet service to Saint Lucians hereby creating a portal where they can interact with the world but for the tremendous assistance they have given to Saint Lucia over the past 10 years.

Prime Minister Allen Chastanet’s hoped that out of the explosion of opportunities the GiNet service offers to Saint Lucians, students and young people pursuing productive vocations will use the service for their betterment.

The ambition of the Government of Saint Lucia is to bring Wi-Fi service to all communities in the country. This does not seem impossible after hearing the prime minister and Sarah Flood Beaubrun, the Castries Central Representative in parliament, Wednesday at the ceremony to highlight the GiNet Project.

“Not to long from now we will roll it out in all the constituencies,” was the prime minister’s parting remark as he acknowledge the effort put into the project by the Taiwanese.

Meanwhile, former Prime Minister, Dr Kenny D. Anthony, says his past administration initiated the project and while he welcomes its execution by the present government, he wishes it moves fast to complete it in its entirety.

Writing about the subject in a Facebook post, Dr Anthony, the MP for Vieux Fort South, said: “While we applaud the commissioning of the GiNet, we hope that it will be quickly followed by a program to increase broadband internet access and state-of-the-art facilities across Saint Lucia and ensure that all Saint Lucians, regardless where they live or how much they earn, will have access to the essential technology tools that are needed for learning, research and business development.” (More on Page 7)