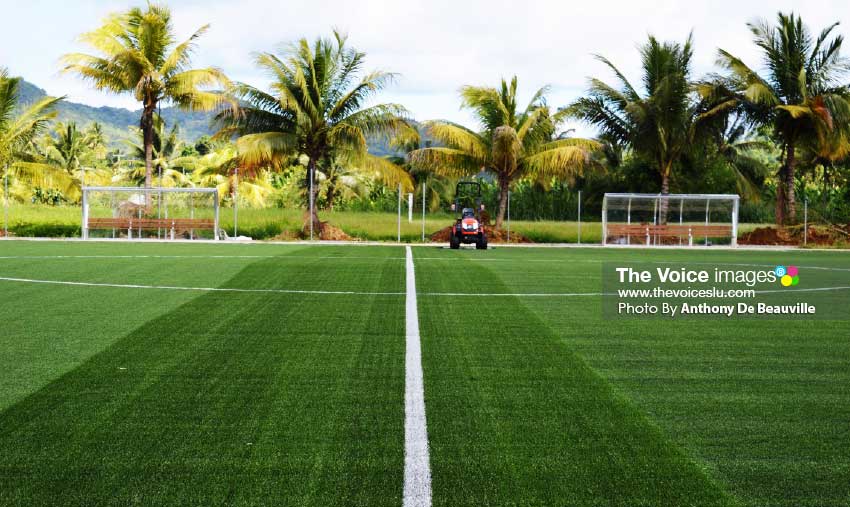 THE Headquarters of the Saint Lucia Football Association was a hive of activity last week Thursday as that sporting organization brought the local media up to speed on what has taken place to date and upcoming developmental programmes and tournaments schedules before it brings the curtains down on what has been a successful 2018.

With Saint Lucia senior national men’s team having one game remaining in the CONCACAF Nations Cup, the SLFA President Lyndon Cooper said, “I do not think there is any need to rehearse the rationale behind Saint Lucia’s participation. Moving forward the SLFA needs to get a better platform to choose from and make a definite decision of Saint Lucia’s future in other tournaments”.

The SLFA is looking to engage the Ministry of Education and the Department of Youth Development and Sports in organizing either an Under 14/15 age group tournament, “We no longer have the influence at the Secondary School level so that might be key for the SLFA to engage the Forms 1 and 2; it simply going to create the continuity so we can get various students playing at the club and district level”. Cooper noted.

He also touched based on the Club License. Once and for all the SLFA will be closing the Club Licensing system before year end. He said, “The SLFA will soon be in a position to give the final figure as to which set of clubs meet the criteria”.

The Under-14 boys is in preparation for the under -15 CONCACAF tournament that is expected to commence in August 2019 in Florida. Cooper said, “We chose that age group simply because those tournaments for the SLFA usually start in January, but the rationale for a December start is to give the SLFA sufficient time for team preparation. Our Under-14 boys at the national level won all of their matches in a recent tournament and the fact that we already have an Under-14 national team we just thought it would have been important for us to continue to engage that age group and to ensure we have a complete team and that’s one of the reasons why the SLFA is putting an Under-14 district tournament”.

The SLFA Boss said he was extremely happy to attract additional sponsors for the under-14 tournament: “We have attracted DBS Television and Saint Lucia Sports Online to be the sole sponsors for the Under-14 tournament. The advantage, outside of the Public Relation, is that those organizations are going to get their value for their money; the reality is they are putting their resources behind one of the most competent youth team we have ever had in the last seven years’, they made us proud in 2018 and we have no doubt come 2019 they will be a team to reckon with in the region”.

The SLFA has decided to close 2019 with a D’ License Course scheduled for December 19th-22n: Cooper said, “You might be wondering why the SLFA is just sticking on the D’License; we want when 2018 comes to an end, that there is going to be not a single club who we have given the License to exist without a qualified coach and we want to make it abundantly clear, there will be no negotiations when it comes to persons on the Technical bench. The SLFA believes this will work well in the next three years where we can get all our coaches with minimum qualifications just to ensure the base of the game is improved significantly”.

The SLFA have also included a Coaching Certification Course which is scheduled for December 12th-18th: The SLFA Chief gave the rationale behind it: he said, “We have finally put together an SLFA Coaching Certification, it is more of a programme that will ensure the coaches the SLFA assign to our national teams especially our nineteen affiliates have the necessary skill to continue coaching in that area, it is going to be a pre-condition for every single individual in Saint Lucian who wants to coach, any sanction or approved competition of the SLFA it will be required or mandatory that the individual carry that certification”.

“It is something out of the extra ordinary, the subjects we are going teach, we have looked at all the courses the SLFA have done over the last five years and thought that they have given us the basic information that we want in terms of our own culture. We have included such topics as Child Protection, Child Rights, and First Aid is just some of the topics we are going to deal with”.

“Before March 2019, the SLFA will be installing lights and sitting accommodation so we begin the utilization of the venue. Once we begin to utilize the Technical Centre, the game in itself is going too improved, because no outside factors are going to pre-determined venue usage for the SLFA in Saint Lucia. The funding by FIFA and the Government of Saint Lucia contribution is going to significantly improve the management and the control of football both on and off the field”. he said.