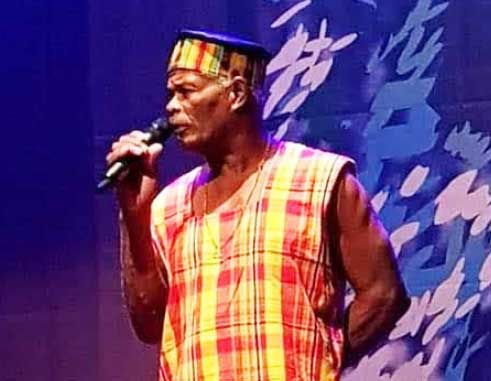 AUGUSTINE Julian, affectionately known as ‘Charley’, has returned from a successful tour of French Guiana, where he was featured as one of the headliners for the 15th Edition of the Festival International du Conte.

This worldrenowned Festival takes place annually in French Guiana and exhibits the talents of artistes and artisans on a global scale.

The Festival International du Conte is mainly a Festival of Story Telling but also includes music, circus, paintings and craft.

This year 2018 Charley was invited as a Story Teller and a musician.

This was Augustine Julian’s second time as an invitee and participant of the Festival, as he participated in November 2009.

This time, the Festival tour took him to many locations in French Guiana, where the venues were many miles apart. This enabled him, for the second time, to explore many areas and to exhibit his talents in Story Telling and Music to a wide variety of audiences that came out to support the Festival.

Some of the venues were in Mana, Awala and Javouhey, Kourou, Macouria, Matoury, Roura and the capital, Cayenne.

Charley is known in Saint Lucia as the leader of The ‘Mama La Kay’ Folk Band.

Although known as a violinist, he also plays a number of other instruments, such as the harmonica, banjo, shakshak, cuatro, guitar — and he is also a maker of banjos.

He has represented his country with his band and as an individual story teller in many parts of the world.

He has travelled with ‘Mama La Kay’ to Spain and to the USA, where they took part in The Fiddle Tune Festival in Port Townsend, in Seattle, Washington and in 2015 at the World of Music Community Development through The Arts & Humanities in Buffalo, Wyoming, USA.

On his own, Charley has represented Saint Lucia in Canada, London, Martinique, Dominica and Guadeloupe, where he has performed as a musician and a storyteller.

This son of the soil proudly represents his country wherever he goes and looks forward to many more opportunities to do so.