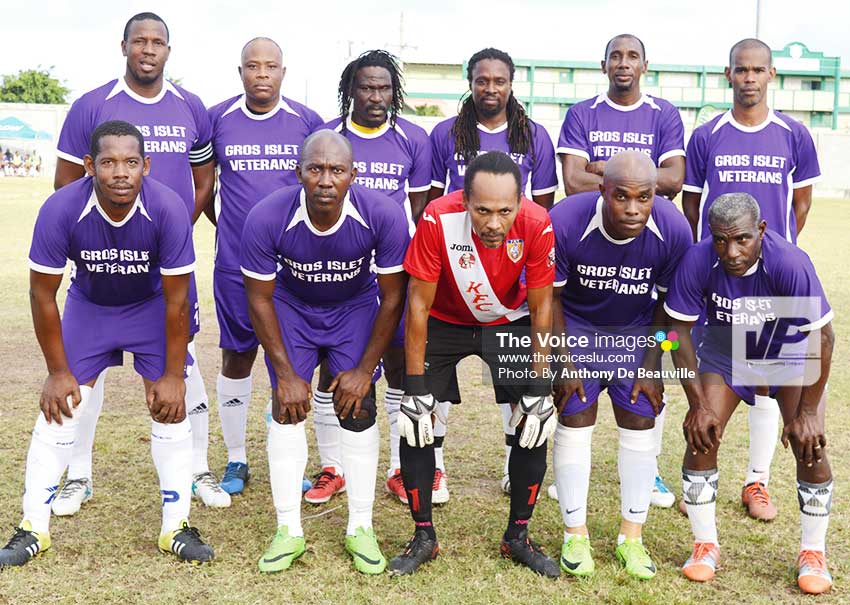 With Game Four of the ICC Women’s World T20 between England and Sri Lanka set to bowl off at the Daren Sammy Cricket Ground from 4pm today, the action also resumes today in the 2018 Veterans In Sports Inc Tournament, as the VISI train will whistle its way to the Mabouya Valley for two days of entertaining football and comradery.

To date a total of five matches have been played, a total of 16 goals have been scored with Mervin St. Croix of Anse La Raye scoring a hat trick against Choiseul Veterans in the 11th, 28th and 38th minutes respectively.

Today, Caribbean Alliance 2018 Gold Champions Soufriere Veterans will look to make amends after their humiliating 9-1 defeat at the hands of Era Masters in the regional challenge played on the opening night of the Tournament (Saturday 3rd), at the Phillip Marcellin Grounds, when they take on Choiseul Veterans at 4.00 p.m.

In Game two, Labowie Connexions will take on Canaries Veterans at 6.00 p.m. and in the final matchup Dennery All Blacks will look to regroup after losing 1-0 to Laborie Veterans, the east coast team will take on Central Vieux Fort at 8.00 p.m.

On Sunday 11th, three matches are also scheduled at the same venue as the excitement and comradery continue.

In game 1, from 3.00 p.m.  Mon Repos Sharks after a dismal first year (2017-2018) will want to prove a point that they are match ready when they play Anse la Raye, who convincingly defeated Choiseul 4-1 in their opening game last weekend at the PMG.

At 5.00 p.m., Gold Cup finalist, Gros Islet will open their campaign against Vieux Fort North who went down to Micoud 1-0 in their opening match.

In what can best described as a must win to stay afloat in the main draw in Group B, home team Valley Legends will play Congorians Veterans at 8.00 p.m.  The Valley Ledgens will want nothing less than a win to even things out following their defeat at the hands of Vieux Fort South 3-1 in their opening game played on Sunday at the PMG.

Meanwhile, the tournament continued on Wednesday evening at the Marchand Grounds with one game on the card. Former Caribbean Alliance Gold Cup Champions (2014) Caricom Masters came up against Prophets and Kings.

Following what most of their fans considered a below par performance last year, Prophets and Kings were relegated to the play offs, as they finished among the bottom teams in the tournament.

After qualifying for this year’s edition and winning their first game in this year’s tournament , Prophets and Kings has sent out a strong message to the remaining teams in Group B (Gros Islet Veterans, Micoud Veterans  and Vieux Fort North) that they should not be taken lightly as they mean business on the pitch.

Prophets and Kings were certainly in good nick on the pitch, that evening decked in their customary green and gold attire they played some excellent football  and in the process went on to defeat the former champions 2-0 with goals from Arnold Placide and Mitchel Mark.