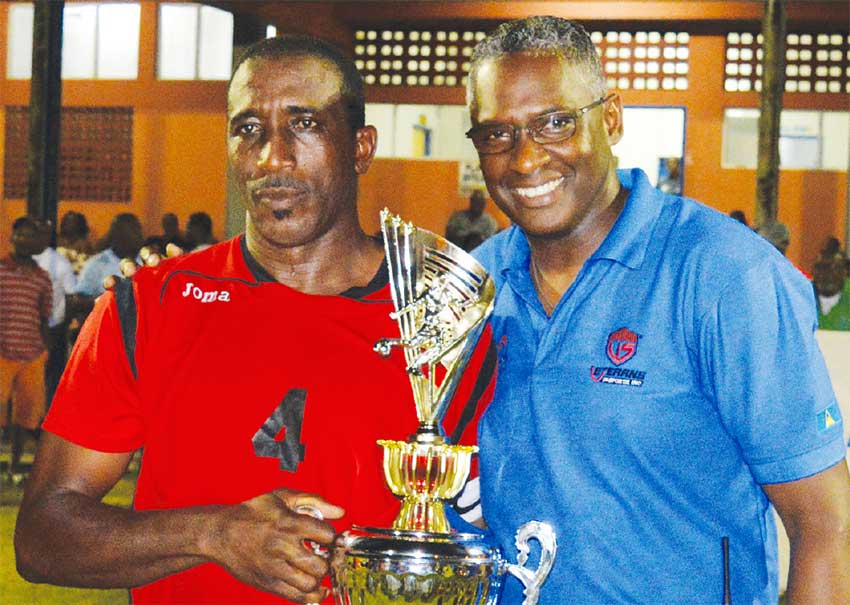 The excitement continued last evening in the 2018-2019 Veterans In Sports Inc Football Tournament at the Marchand Ground with one game on the card, Prophet and Kings was scheduled to play former Caribbean Alliance Gold champions Caricom Masters from 7.00 p.m.

The VISI train will whistle its way to the Mabouya Valley on Saturday 10th at the La Ressource playing field where Caribbean Alliance 2018 Gold Champions Soufriere Veterans will look to redeem themselves following their 9-1 defeat at the hands of Era Masters in the regional challenge played on the opening night of the Tournament (Saturday 3rd), Soufriere will meet Choiseul Veterans at 4.00 p.m.

In Game two, Labowie Connexions will take on Canaries Veterans at 6.00 p.m. and in the final encounter, Dennery All Blacks will look to win this one when they clash with Central Vieux Fort at 8.00 p.m.

On Sunday 11th another three matches is scheduled at the La Ressource playing field as the excitement and comradery continues.

Game 1, from 3.00 p.m.  Mon Repos after a dismal first year will want to show slate when they play a formidable Anse la Raye team who convincingly defeated Choiseul 4-1.

At 5.00 p.m., Gold Cup finalist, Gros Islet will open their campaign against Vieux Fort North who went down to Micoud 1-0 in their opening match; while home team Valley Legends will play Congorians Veterans at 8.00 p.m. in must win situation for Valley Legends if they are to remain in the Gold Cup rush.  The Valley Ledgens will want to even things off following the opening game played on Sunday when they were defeated by Vieux Fort South 3-1.

On the opening day (Saturday 3rd) Game 1, Micoud Veterans defeated Vieux Fort North 3-1: for Micoud the goal scorers were Guy George in the 4th minute and Conrod Evans in the 29th and 36th minute. VFN lone goal was scored by Dwayne Edward in the 14th minute. The halftime score 3-1.

In game No. 2, played between Flow Plate champions VSADC and Island Masters out of Canada, VSADC came out winners 1-0 the goal scored by R. Charles in the 7th minute.

The final game of the evening Era Masters of Trinidad and Tobago defeated defending champions Soufriere Veterans 9-1 in a one sided affair. For Era Masters, Edmund Homer in the 6th, Jerome Charles in the 13th,46th and 54th minutes (hatrick), Mark Morris in the 32nd and 80th minutes, Titus Elva in the 54th minute and Raymond Clemens in the 75th minute. This game was in the Regional Challenge Cup.

For the defending champions Soufriere Veterans, Jerome Serville in the 12th minute. The halftime score 3-1.

On day 2, Sunday 4th in game 1, Laborie Veterans defeated All Black of Dennery 1-0 the goal scored by Anthony Duncan in the 47th minute. The men from the east coast (ABD) had themselves to blame after squandering at least seven scoring opportunities.

In game 2, Anse la Raye Veterans continued where they left off earlier this year defeated Choiseul Veterans 4-1.  Anse la Raye, Mervin St. Croix continued his good run on form scoring the first hat trick of the tournament with goal in the 11th, 28th and 38th minutes, while Jason Laurencin scored the other in the 60th minute. Norbert Cooper was Choiseul’s lone goal scorer in the 46th minute.

The final game on the evening saw Vieux Fort South defeating a weakened  Valley Ledgens 3-1 with goals from   Ernie Soudatt in the 22nd minute, Lucas Harris in the 24th minute and Trevor Modeste in the 36th minute. For Valley Legends, Clifford Sandiford pulled one back in the 59th minute.

CEO Veterans in Sports Inc (VISI), Alvin Malaykhan, spoke to the VOICE about the weekend showpiece and this is what he had to say, “We’re off to a very good start, with three exciting matches including our two foreign teams, Island Masters of Canada and Era Masters of Trinidad and Tobago. One playing for the Goodwill Ambassadors Cup (VSADC versus Island Masters) and the other dubbed “(Prime Time Matchup) for the Regional Challenge Cup, when Era Masters, one of the best Veterans football team in the region, took on Caribbean Alliance Gold Cup Champions  Soufriere Veterans”.

According to Malaykhan, Era Masters with the quality of play and showing where we in Saint Lucia would like to get Veterans football indicates to us that there is a lot of work to be done if we want to compete on the regional and international stage. We saw them giving Soufriere a lesson on the pitch, a 9-1 defeat. The scoreline does not mean Soufriere played badly, but reflects the quality of play, the composure and the confidence we want to see from our local players.

“At present we are probably at the level of Island Masters; and Era Masters is where we aspire to, we don’t want to get confident and believe our level of veterans football we are all ready; there is still a lot of work to do if we really want to expand the tournament and invite foreign teams, it is a product we have to build on, it’s a warning to our teams that we have to develop the sport”. he noted.