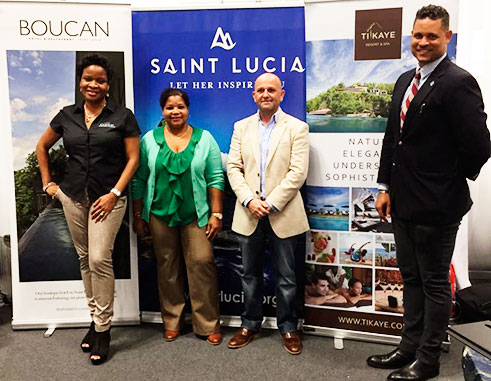 The New York Times Travel Show is the largest consumer travel trade show produced in the United States and featured over 150 destinations.

The Travel Industry Conference took place on January 26 and was dedicated to members of the travel trade. The SLTA was one of 33 destinations invited to present at the Caribbean Tourism Organization’s “Focus On The Caribbean” conference.

The theme of the trade conference was “The best way to support the Caribbean is by continuing to send your clients”. The goal was to inform the hundreds of media and travel trade representatives present that the Caribbean is open for business. Destinations were invited to provide updates on their state of readiness.

Richard Moss, the SLTA’s Sales Manager with responsibility for trade, provided the destination’s update which included the latest developments in accommodation, diversity in activities and the Soleil Summer Festival.

There was a question and answer session at the end of “Focus on the Caribbean” which gave destination representatives the opportunity to engage participants. In his response to a question which dealt with the need for more cultural and heritage experiences for visitors, Moss explained that the destinations all have rich cultures, histories and experiences, adding that: “Our tagline Let Her Inspire You speaks to the ability of the destination to fulfil the needs of any discerning traveler, offering wonderful experiences which continue to inspire travellers.”

On January 27 and 28, the event was open to consumers and two of the island’s resorts — Ti Kaye Resort & Spa and Boucan by Hotel Chocolat — partnered with the SLTA to showcase the destination, fielding questions from hundreds of trade professionals and travellers interested in Saint Lucia.

Throughout the three days, the SLTA conducted many one-on-one interviews with trade professionals who were all interested in how they could partner with the SLTA to provide a more tailored experience for their clientele.