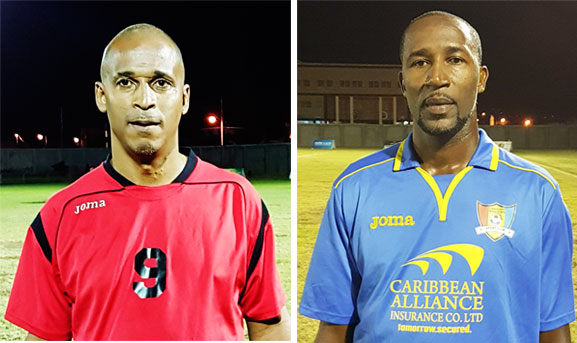 The four teams booked their places in the finals after exciting semifinal victories at the Phillip Marcellin Grounds at the weekend.

Despite a few off and on rain showers before and during the encounter Saturday evening which apparently kept football fans away, VSADC were made to work hard by Flow Lancers FC, the former three-time champions of the Gold Cup. At the end of the battle, they were still able to book their final spot with a 1-0 win, a goal converted by Guy Jn. Baptiste in the 23rd minute and his third of the tournament.

Flow Lancers FC made some untimely substitutions just when they had VSADC on the back foot. Their relentless pressure against the former champions was certainly their best outing on the pitch in this year’s championship.

For VSADC, goalkeeper Stanley Lesfloris was equal to the task and so, too, Sean Kirton and the experienced Martin Alexander in the defence.

With a 1-0 deficit, the former champions regrouped by simply knocking the ball around in the midfield area, hoping to catch LC on the counter attack. Andy Joseph, who received a free ball, shot home the much-deserved equalizer in the 33rd minute to end the first half even.

Both teams looked set for an entertaining second half final. The tournament’s first goal scorer, who also has the fastest goal in the tournament, CEO of Veterans in Sports Inc., Alvin Malaykhan, put his team ahead in the 79th minute, much to the delight of his teammates. LabowiConnextions fought back courageously for the equalizer but to no avail.

This Saturday, Caricom Masters will meet VSADC in the finals and what a final at the PMG, while Flow Lancers take on LabowiConnextions for third place.

On Sunday evening, Gros Islet virtually stormed their way into the final of the Caribbean Alliance Gold Cup as they trounced Valley Ledgens 4-1 with three first-half goals. Francis Lastic opened the scoring in the 12th minute, his 4th goal of the tournament. Sherman Sylvester made it 2-0 in the 14th minute to go level with his captain on the goal tally of the tournament and Roger Celestine, in the 30th minute of play, on the way to sealing Valley Ledgens’ fate.

Following the halftime break, Gros Islet Veterans continued their goal scoring spree as Roger Celestine scored his second in the match (in the 67th minute) to make it 4-0 and bring his goal tally for the tournament to 6. Samson Robinson scored one for Valley Ledgens in the 80th minute to leave the scoreline 4-1 at the final whistle.

In the final match on Sunday evening, Soufriere Veterans edged out Central Vieux Fort 4-2 in dramatic fashion. Soufriere’s Tony Paul’s 3rd minute goal caught CVF custodian Jeff Emmanuel and the defense flatfooted to take a 1-0 lead. Prolific striker Jerome Serville quickly made it 2-0 for Soufriere in the 9th minute and in the process went ahead of Roger Celestine (Caricom Masters) on the goal tally with his 7th. It was another defense blunder by CFV.

Quickly after, CVF’s Titus Elva had a one-on-one with the Soufriere goalkeeper OsbertServille only for Elva to hit way above the crossbar.

CVF’s horrors continued as Soufriere continued to press home by seizing every opportunity and capitalizing on CVF’s defense blunders.

Marinus Joseph put Soufriere further ahead in the 24th minute, while Augustin Lucien sealed the halftime deal in the 31st minute to make it 4-0.

There was quite a bit left to play for going into the second half. Soufriere went into defense mode as CVF upped their game, but Wilbur Moffat’s two late strikes in the 80th and 89th minutes were a little too late.

In the finals scheduled for Sunday, February 10, Gros Islet Veterans will play Soufriere Veterans while Central Vieux Fort and Valley Ledgens will meet for the third place silverware at the PMG in Vieux Fort.