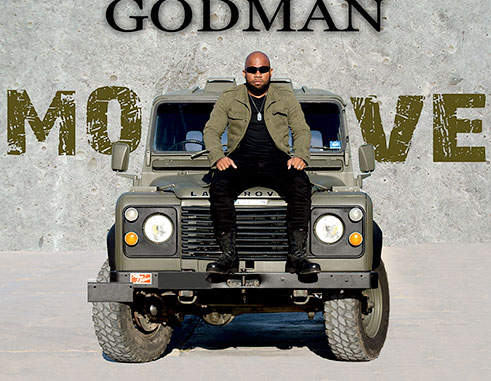 “SUN Is Shining Again” and “Move” are the titles of two new singles released this week by Denver “Godman” Pierre, a renowned local gospel artiste who not only performs but writes the lyrics to his own songs.

Having performed at Tea Time Jazz back in 2013, Pierre has since recorded a large number of tracks, including the abovementioned songs. They both were written by Pierre and produced by Francis “Leebo” De Lima.

Pierre describes “Sun is Shining Again” as “a song written from the heart…a prophetic song of hope.” That hope, he says, is for the nation to recognize that “God has brought deliverance…coming out of a difficult season.”

He says he aims to provide hope on a multifaceted level; not only in releasing this song he seeks to “Bring hope to those going through difficult seasons in their personal lives”, but he also hopes that the song speaks “prophetically to nations who have experienced tragedy on a national level.”

The singer describes “Move” as “a powerful and energetic song, which seeks to reinforce who you are in Christ”; a description which signals that this song is more upbeat than the first. With “Move”, Pierre aims to “break the strongholds that have crippled one’s mind through difficult and testing times.”

Writing “Move” for Pierre was “a personal expression of a shift in one’s mindset.” That shift is the inspiration for the song title as he hopes people would move “from the past, into the destiny God has for them”, all while having a “radical mindset.”

Pierre was born and raised at Water Works Road, Castries and has been singing since kindergarten and playing drums from age 13. Having embarked on a musical journey since 2003, where he performed at various concerts and church functions, Pierre, after a few years, developed a love and passion for writing and penned and recorded his first song, “Praise the Father”.

That was the first of what was to come from the singer/songwriter, as he followed up his debut single with “I Need You”, a song which was included on a compilation album titled “The Project”.

Some years later, Pierre wrote two songs which increased his notoriety and brought him into the national spotlight. In 2011, he wrote and recorded “Never Let You Go” and soon after he recorded “Changed”. A video was made for ‘Never Let You Go”, which provided Pierre with much visibility since it got an amazing amount of airplay.

“Changed”, which also has a music video, made Pierre a household name nationally, and then he performed in Tea Time Jazz in 2013, where he got rave reviews.

Pierre said he accepted Christ in 2003 and describes himself as a young evangelist who has a passion for youth, who is not only a minister but also a visual artist and entrepreneur.

A previous article in The VOICE entitled “Denver Pierre — Bringing Art Home”, featured Pierre’s visual art career and business (D.G.P. Arts) and goes into great detail, chronicling his journey from his time at St. Mary’s College to the big break he got in the art industry.

As his biography says: “Godman has a strong love for reaching people through word, song and testimony.” He credits his fresh approach to gospel lyrics to his friends, family and mentors who help him bring his message of hope that he desires will bring change and transformation to the nations.”