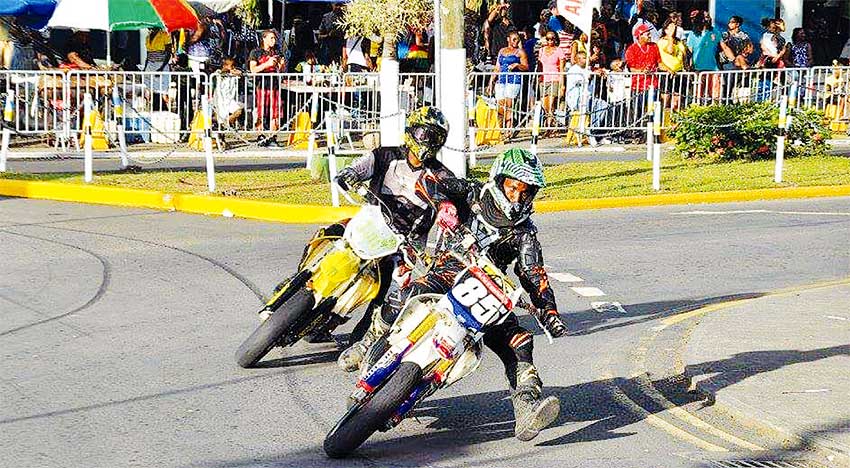 IN keeping with the theme for our island’s 39th Independence anniversary, the St. Lucia Moto X Club will once again be staging a SuperMoto event in Castries – “Lucian Style”.

Come see firsthand and be part of one of the most exciting forms of motorsport as skilled riders navigate the turns and obstacles with superior handling, cornering, drifting, acceleration and wheelies that can only be experienced through SuperMoto. The date is Sunday, February 25, and the action begins from 2:00 p.m. along the Castries Waterfront.

The race is just a jump-start to St. Lucia Moto X Club’s Motocross and SuperMoto season. With contingents from Barbados, St. Vincent, Grenada, Guadeloupe and Martinique who have all expressed their commitment to be on island to celebrate with us and participate in our Independence activities, SuperMoto being one such event, we anticipate it’s going to be a race St. Lucians will not soon forget.

Judging from the word on the street from our racing communities, we expect record numbers next week Sunday to come cheer and support our local boys, be it rain or shine.

Like last year, St. Lucians and guests to our shores will be treated to the best of bicycle and motocross skills from around the region, with Lucians being the judges.

We must, however, say a big thank you to our sponsors, M&C General Insurance, Renwick & Co, ECCO, Lucelec, St. Lucia Air and Sea Ports Authority, Ministry of Sports, Youth Development, Equity and Local Government, Monster Energy/Food Express and CoCoNutz for their invaluable support.

Remember to check us out on Facebook for updates and information on races, motocross being next on March 25 at Cul-de-Sac. See you there.