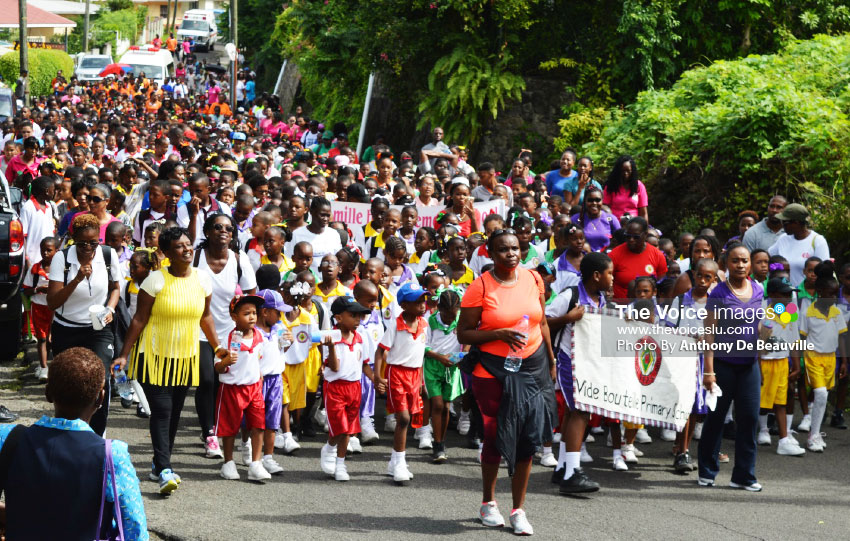 STUDENTS from thirteen infant, primary and secondary schools in the north of Castries are still celebrating after taking part in the 9th annual fun walk dubbed “Building Healthy Bodies To Sustain Energetic Minds”, held on Thursday. The three-hour event is being hailed a huge success by the organisers, the District II Education Office.

Thursday’s event attracted close to 1,300 students who were eager to take up the challenge which encompassed walking within Sans Soucis and environs. The event was aimed at encouraging students to walk on a daily basis and not only for physical education activities during school hours.

Things worked out as planned, as the rain stayed away. The outriders from the Royal Saint Lucia Police Force and medical personnel from the Saint Lucia Fire Service and Saint Lucia Red Cross were present long before the 10:00 a.m. start.

Upon return to Camille Henry Memorial School, just when some teachers thought the students were burnt out, they asked for more of the Socacise put together by Miquel La Porte. Afterwards, the students were entertained by Subance and Mikey from the Dennery Segment.

An elated District II Education Officer, Martha Foster, spoke to The VOICE about the event.

“This is an activity we do every year to kick-start our sports term,” she said. “The second term is usually dedicated to sports islandwide and we always start off with a bang, whereby all thirteen schools within the district come together. The level of participation is at an all-time high. We had music, there was camaraderie and the children had plenty of fun.”

She said the walk was in preparation of the championship sports meet slated for March. Individual primary schools will commence their respective sports meets starting from January 26 at the Mindoo Phillip Park, followed by the intra-district sports meets in March. The hope is to select the best team to represent the district at the annual inter-district primary schools sports meet.

Foster said this is why they are starting the sports term with the fun walk, so as to sensitize the students letting them know the importance of sports in education.

“The Ministry of Health has embarked on an initiative to possibly ban the sale of soft drinks in schools. We are following suit; we are looking at healthy eating in schools and the things we sell to the students. Of course, we know physical activity is important in combating juvenile diabetes, so we are trying to promote that aspect in our schools.”

Foster had a word of caution for parents, urging them to avoid putting sweeteners and non-nourishing items in their children’s lunch kits.

“We are begging and pleading with our parents. We know sometimes it is the cheapest way to go in terms of purchasing the soft drinks, cheese sticks and corn curls. In the long-run, it actually isn’t the cheaper way. We are imploring parents to spend that extra dollar to get fruit juices — apples, oranges, watermelon — and give the children the healthy options so they can live healthy lifestyles.”

She had much praise for the parents as well who turned out to support Thursday’s activity: “We had a very good turnout this year. We had total parental support and total school support. The event was a tremendous success. We are looking forward to making it bigger and better for our 10th anniversary in 2019.”

Studies show that 15-minute bouts of aerobic exercise, including walking and cycling, can significantly increase positive mood and decrease negative mood amongst younger children. Active travel can increase concentration levels by up to four hours.

Walking is also known to improve academic performance; children arrive brighter and more alert for their first morning class; walking reduces stress and increases creativity, both of which will help a child’s performance at school.