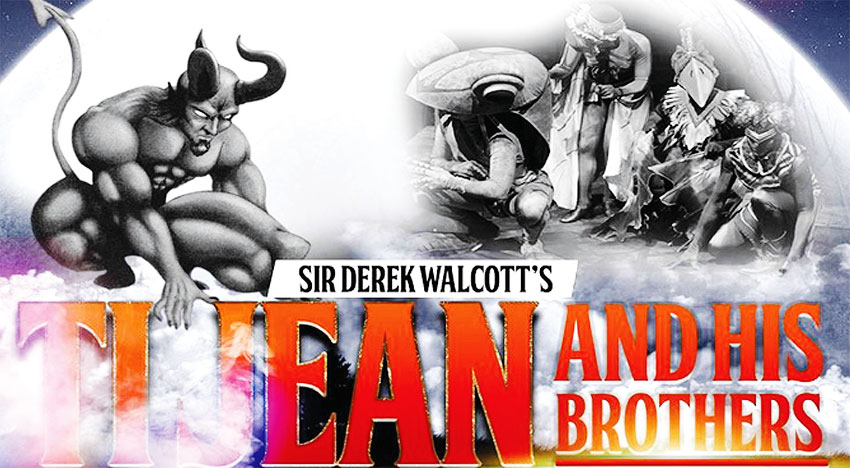 PRESS RELEASE – THE Nobel Laureate Festival Committee in collaboration with the Department of Education, Innovation and Gender Relations will host the 2018 theatrical adaptation of Sir Derek Walcott’s play, “Ti Jean and his Brothers.”

The production is directed by Kentillia Louis with co-director Christelle Lee and the performances are slated for this weekend — beginning with a showing for students and children on Friday, January 19 from 3:00 p.m. and on Saturday, January 20 for adults and families from 7:30 p.m.at the Nationbal Cultural Centre.

At its core, “Ti Jean and his Brothers” depicts a family in crisis. Despite being warned of the “hidden nets of the devil” by their mother, the three brothers, one by one, must confront evil on their own terms. Sir Derek’s tale of creative survival finds a special urgency in this production which is inspired by the culture and history of St. Lucia, in particular the island’s rich musical and visual art traditions.

This 2018 edition of “Ti Jean and his Brothers” promises to be like none of its predecessors. The new adaption promises poetic and musical, playful, lyrical and epic — incorporating all genres of the theatre arts programmes currently being taught in the schools.

According to the play’s director, Kentillia Louis: “The actors in the play have done an excellent job in bringing their own youthful flare and spin to the production, making the production quintessentially St. Lucian, but undoubtedly relatable to everyone regardless of age, colour or creed!”

Rehearsals and production for the play began as early as September last year, which shows the level of dedication towards putting on a masterful show.

Of course, putting on a piece with this iconic pedigree would not be possible without the following partners support: Gold Sponsor Bank of Saint Lucia, Lucelec, Department of Education, Innovation and Gender Relations, First Citizens Investments Services, AIM Events, YouthSPAC, Silver Shadow Performing Arts Academy, Youth In Arts, and Cultural Development Foundation. Additionally a Special Thank you to the Principals of the schools which are participating or supporting, in particular Entrepot Secondary School, Castries Comprehensive Secondary School and, most importantly, the parents.

Tickets for the school show were $10 and Saturday’s showing costs $20 for adults and $10 for children. For more event information, visit the Events page at http://bit.ly/2mDbN8O or for tickets contact 716-5800 or email aimclientservices@gmail.com