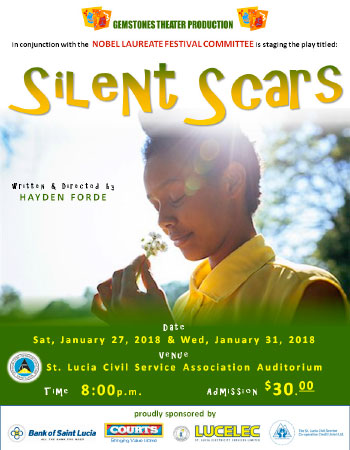 PRESS RELEASE – THE nation will for the next few weeks continue its reflection on the outstanding contributions made by Nobel Laureates, Sirs Arthur Lewis and Derek Walcott, during the 2018 Nobel Laureate Festival.

Throughout the twenty-five year-old Festival, the exceptional work of the distinguished sons of the soil is highlighted in a variety of presentations around the island to create awareness of their pursuits and as inspiration to every Saint Lucian to work steadfastly towards the fulfillment of his/her dreams and life aspirations.

Silent Scars depicts the telling and reflective story of Abby (Nicole Samuel), who was raised by her father in nearby Barbados but later moved to Saint Lucia to live with her promiscuous mother, Linda (Alice Medard). Tension between mother and daughter is high throughout the play as Abby struggles in her early twenties to share her experiences with her nonchalant mother. Abby’s closest friend, Thomas (Anthony Martin) is deeply concerned about his friend and tries desperately to find the source of a bitterness which Abby has carried for many years.

The 75-minute-long portrayal of Silent Scars will premiere on Saturday January 28 at the CSA Centre in Sans Souci from 8:00 p.m. The thespians will take the stage on Wednesday, January 31 for a repeat performance at the same venue and time.

Admission to view the production is $30 and tickets are available from members of Gemstones Theatre Production and at the auditorium on play nights.