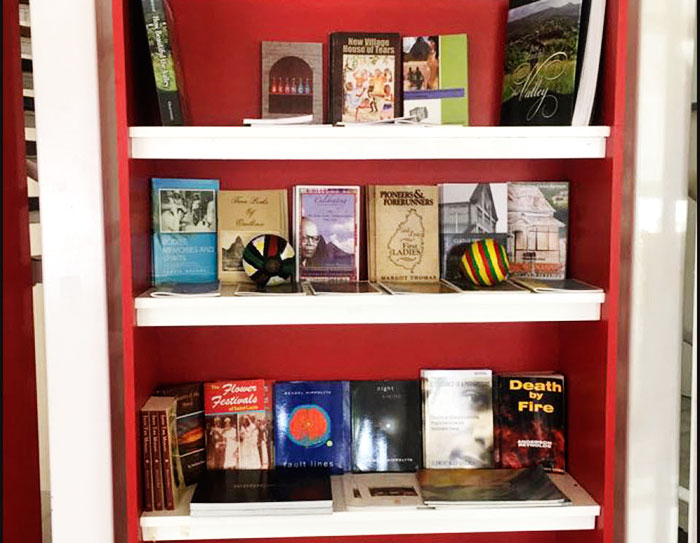 PRESS RELEASE – SAINT Lucia’ Books is a brave, visionary venture. Its mission is not simply, or even mainly, to sell books. Its full intention is to help to bring books to where they should be in our everyday lives, part of normal daily living, like buying and consuming food. It is the brainchild of Dahlia Francois and her path toward it has all the markings typical of the woman and her work: social commitment, especially toward the youth; artistic creativity; collaboration with partners of all kinds.

Having been brought into the Nobel Laureates Week Committee in 2009, she used her passion, artistic flair and skills for networking to bring a focus to our craft tradition, culminating in a hugely successful craft fair on the Derek Walcott Square in 2012. That felt like a climax to the work she’d been doing in craft and the question naturally arose: What’s next?

Her radar for the needs of young people took her to the question: How do you make books and reading a personal, pleasurable part of their everyday lives, not just a school thing? She educated herself about the Central Library’s role in Nobel Laureates Week, the annual exhibition it mounted, and decided in 2015 to supplement the role of the library during NLW and highlight even more the work of Saint Lucian writers.

In 2015, she mounted an exhibition at the Blue Coral building and in the process discovered the wealth of Saint Lucian writing (more than 300 authors were represented) and the public’s interest in it. Sunshine Bookstore had closed and people were sensing a void. People were suggesting works by various writers and literature students were talking about the scarcity of information online about Saint Lucian writing.

So in 2016, when she did the exhibition again, this time using the Castries Town Hall and the Central Library, she targeted young people, arranging for schools to be notified and encouraged to visit. The response was massive. Many schools visited and when the exhibition closed after two weeks, there were still a number of young people wanting to see it.

Last year, the trend continued, with the numbers and enthusiasm continuing to rise. The shape, atmosphere and outreach of the exhibition have begun to make it a staple for the cultural diet of young people during NLW.

This year, the exhibition has a programme of activities which includes interactive sessions with seasoned writers, a Spoken Word event, headed by Asher Small, with an open mic component, Bamboo Production Theatre Arts Students, presentation of the BONJOUR Sent Lisi Series with Michael Walker and the launch of an anthology of Commonwealth literature which has work by poet KendelHippolyte and for which event, a Barbadian writer, NailahImojah, will be visiting to present her work and to have sessions with students.

Somewhere in the evolution from the first big exhibition in 2015 to now, SLU Books has emerged. More than a bookshop, SLU Books is a literary movement which has different features. It maintains a presence at Alliance Francaise through an attractive bookstore, a chill-out space where people can come and buy Saint Lucian coffee, tea, pastry and read and meet other people who are into that kind of thing. Dahlia has plans for SLU Books in 2018 and beyond. A collaboration with Valmont & Co. Ltd. has resulted in Saint Lucia Books @ A.F. VALMONT Bookstore.

There are plans for a pop-up bookstore in hotels; for another bookstore in a proposed third phase of Point Seraphine. Collaborations with Jako Productions in Vieux Fort, Catherine Prospere in Soufriere and other interested partners are part of the vision. Dahlia is envisaging events at the Walcott Heritage House and other venues as a natural development of the plan to make literature a normal, everyday thing.

She is encouraged by the support she is receiving from local writers and the way she puts it, “I figure if I have that passion and I have the writers behind me, something will happen.” She is deeply aware of the labour of love that writing can be and is concerned that books do sell and writers begin to earn income from their work. So she is being careful to have a strong business framework for this mission.

But it is first of all a mission. She disagrees with people who simply say that young people now do not read and then give up. She insists that they do read when you can light up their enthusiasm for it. Many who are reading now are using their technology to read, so she believes you have to “go where they are.” Still, as she puts it, “There’s something about holding a book in your hand.” Therefore, the mission of SLU Books continues this Nobel Laureate Festival and beyond. In Dahlia’s words, “It is all worth it if I can encourage two children to start reading.”