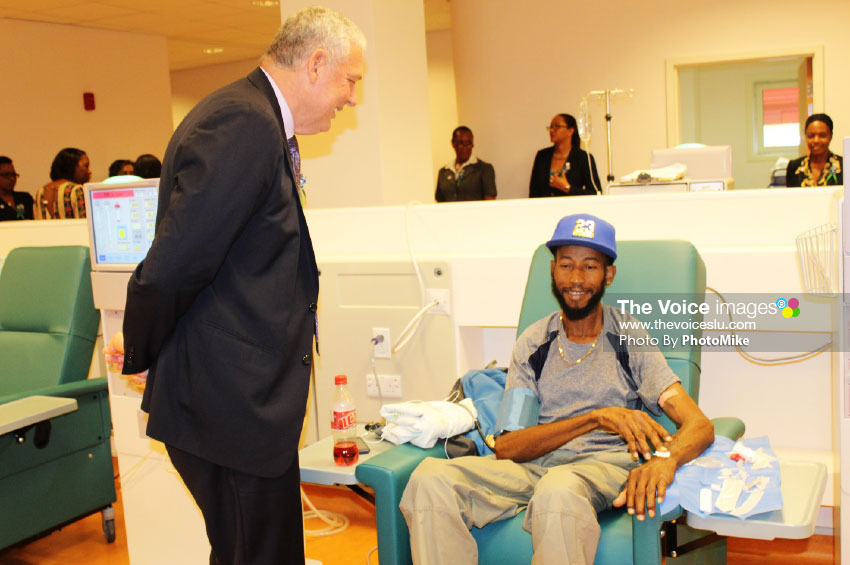 DESPITE the Owen King European Union Hospital (OKEUH) not being fully operational as yet, a significant milestone was achieved on Wednesday, enough to bring Prime Minister Allen Chastanet at the opening of the hospital’s dialysis unit.

“I swear I won’t cry or let you see or feel my emotion,” the Prime Minister said as he choked through the first few minutes of his address struggling to get his emotions under control.

The Prime Minister’s tears aside, the small ceremony to mark the opening of this unit at the hospital was indeed an important moment a milestone in the country’s struggles in treating citizens in need of dialysis.

At one point, getting on the dialysis list was almost impossible for people in need of the treatment — unless someone on the list dies.

To have eleven brand new machines added to the dozen said to be on their last legs at Victoria Hospital is indeed a small marvel for people on the infamous waiting list for dialysis treatment. The machines at Victoria Hospital will not be decommissioned immediately, noted Felix St. Hill, Permanent Secretary in the Ministry of Health.

“We have started the exercise of recapitalizing the old dialysis unit at Victoria Hospital. It is not a unit we are going to abandon,” he said.

The idea is to have the units at the OKEU Hospital and Victoria Hospital working at the same time so as to accommodate more people on the infamous waiting list needing dialysis. But operating more dialysis machines comes at the expense of the hospital, meaning its postponement into full operational mode.

According to the Prime Minister, there was no point in opening the hospital and within two weeks close it due to a lack of operational funds.

“I had to cross every ‘T’ and dot every ‘I’ in making this thing happen,” he said, referring to the opening of the dialysis unit.

Chastanet said that the $10 million set aside by the former administration for the opening of the hospital was not sufficient.

“That is the reality and so we decided to open up the hospital in phases and continue to work on long-term financing to be able to support this sector,” he said.

The government first had the idea of financing the hospital through a five percent increase in contributions to the National Insurance Corporation (NIC). This meant that NIC contributions would be 15 percent instead of 10 percent, meaning that a person would have to pay 2.5 percent more with the other 2.5 percent coming from the employer.

“As practical as that may seem, that additional money which would have been about $44 million, would have gone a long way in helping operationalize the hospital, but it would have left the people who could not afford health care in the same position. All it meant was that we would have better facilities and so while that was very important, unfortunately this would not be sustainable,” Chastanet said.

The government’s new idea for health care financing is through a national health insurance programme and, according to the Prime Minister, that insurance would be available to all St. Lucians — even the unemployed — below the poverty line and those who do not have any income.

“The government would have to pay their insurance for them but everybody in this country would have health care insurance,” Chastanet said, adding that through the national health insurance programme a revenue stream would be created for the operation of not just the hospital but the Millennium Heights Medical Complex.

Government, the Prime Minister said, is looking at opening other sections of the hospital such as the radiology unit and is already in consultation with different groups of people toward that end. However, he failed to give a time-frame for this, which is understandable given the length of time it took his administration (18 months) to open the dialysis unit.