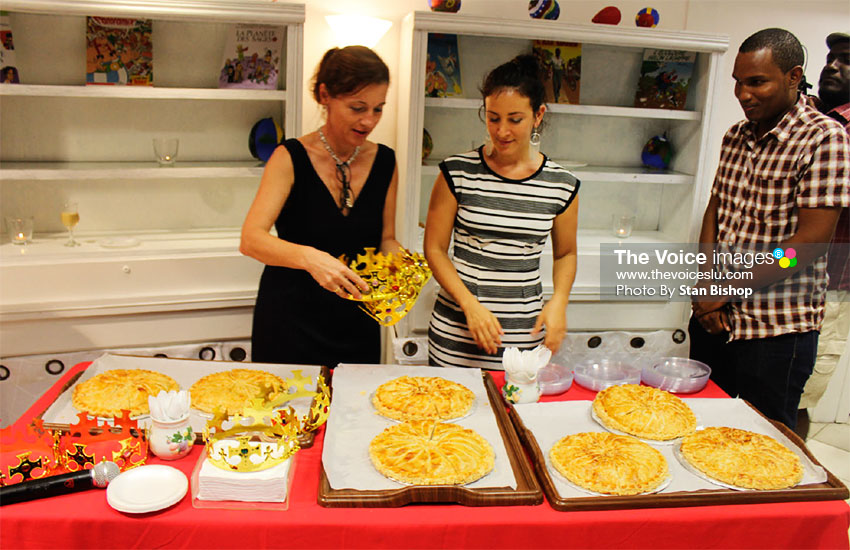 LAST Monday evening, Alliance Française launched its programme, “Youths and Books Celebration”, which was hosted at the Pyramid, Pointe Seraphine.

The event is part of the Nobel Laureate Festival calendar and Director General of Alliance Française, Evelyne Gasse, got the evening’s event underway by thanking everyone for attending. Her focus, as well as the focus of all of the event’s presenters, was on the importance of books and reading.

The presenters also focussed on St. Lucia’s two Nobel Prize winners, Sirs Arthur Lewis and Derek Walcott. During the launch, which included a smattering of art, music and dance throughout the proceedings, Gasse spoke about upcoming activities the Alliance Francaise will be involved in throughout the month.

Stephane Dovert, Regional Consular for Cooperation at the French Embassy, spoke about the Nobel Laureates and the impact books had on them in their respective fields. Trying to figure out, as he put it, exactly what “did unify Sir Arthur Lewis and Sir Derek Walcott” apart from their Nobel Laureate status, Dovert concluded that both “have travelled extensively” and both had teachers as parents who, in turn, introduced them to books.

Speaking on the impact books had on the Laureates, he said that “[books opened] their minds even more than travelling”. Dovert transitioned to the impact they have on people in general, lamenting the fact that most children do not have parents like those of Sirs Arthur and Derek to introduce them to books and impress the importance of reading upon their minds.

He concluded by highlighting the Alliance Française’s initiative to connect the Nobel Laureates Festival to reading and books, remarking that it “is absolutely gorgeous. It’s marvellous; a marvelous idea.”

Continuing with the theme of reading and its importance, Gasse informed that the second edition of “La Nuit de La Lecture”, is scheduled to take place this Saturday, in France. She said that more than 1500 reading places will be opened in France that night where musical readings and theatre performances will take place. The event’s aim, she said, is to “create the desire for reading”. Citing Françoise Nyssen, the French Minister of Culture, Gasse said that access to reading is not a reserved right for a few.

She pointing out that the contribution of Alliance Française to the Nobel Laureate Festival “will be based on books and reading”. Gasse also elaborated further on her view of their importance to people in general.

“Reading makes you stronger,” she proclaimed, while also saying that it “often makes you find the path of excellence.” She pointed out that books give people the opportunity to travel and “open (their) minds to other cultures (and) to other points of view.”

Gasse also thanked the support the embassies had given to the Alliance Francaise’s endeavour.

Painter Jonathan Guy-Gladding did a live painting session, which Gasse said was inspired by the theme of books and reading.

Also at the event was Dr. Travis Weekes, who said he was asked by Dovert to choose a Derek Walcott poem, which would encapsulate the theme of the night’s launch. He read two of Sir Derek’s works. His recital was followed by a dramatization by Richard Ambrose and his group, who had performed a dance.

The Deputy Director and Pedagogical Coordinator of Alliance Française, Sabrina Lipoff, announced a competition for students aged fifteen to twenty whereby the contestants must create a project in order to encourage young children to read.

She also announced a competition involving French teachers, whereby they must “think about how they use books in order to teach French as a foreign language.” She said that the various projects must be presented on the January 30 at Alliance Française.

Lipoff, towards the end of the event, described the Gallet de Rois, a cake which is eaten in France during January from the first Sunday to the end of the month. Lipoff gave more details about the tradition, which she pointed out had both pagan and Christian roots.

The event concluded with many guests taking part in the Gallet de Rois.