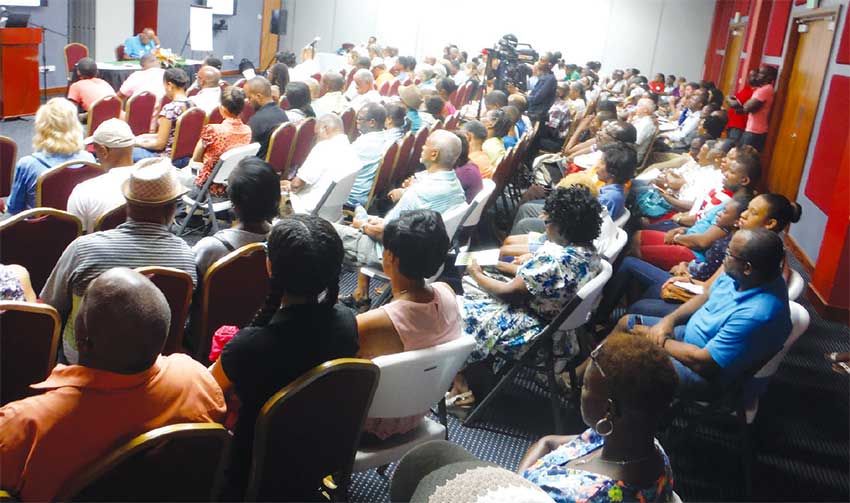 The meeting was officially opened by SLNT’s patron, Dame PearletteLouisy, who expressed her satisfaction with the large turnout. She urged the Trust to stay focused on its mandate in light of the challenges the organisation is facing. She also encouraged members to be more supportive of the organisation at this time.

In commemoration of Her Excellency’s 20th anniversary as Governor General of Saint Lucia, Trust member Bryan Vidal presented her with an album featuring images of Dame Pearlette participating in various Trust activities. Thereafter, the SLNT’s Western Chapter serenaded Dame Pearlette with a “thank-you” song in Creole.

According to SLNT’s Director, BishnuTulsie, “Those in attendance were updated on numerous Trust initiatives, such as the coastal stabilization project; the Fer-de-Lance Management project; the challenges which led to the closure of Walcott Place; the Trust’s advocacy role in the Principle 10 (Access Rights) process; the restoration of mangroves and our efforts to publicize our work and recruit new members through visits to schools, clubs and various organisations.”

As anticipated, members expressed grave concerns about the Development Control Authority’s (DCA) decision to grant approval in principle for the change of land use of the Pigeon Island National Landmark to ‘recreation’. Regarding the proposed dolphinarium, members were told that this would not only affect the water quality of the beaches in the area, making it unsafe for swimming, but fishermen, dive operators, whale and dolphin tour operators amongst others would also be negatively affected.

Thereafter, members called for the Trust to embark on a vigorous education campaign in English and Creole so that the general public gets a better understanding of the issues pertaining to the proposed dolphinarium. One non-member indicated that the DCA’s decision would be illegal as one needs the property owner’s consent before changing the use of their land.

Additionally, the gathering gave a resounding applause when they were informed that the International Organisation of National Trusts (INTO) has offered pro bono legal support for this matter and that two local lawyers have also contacted the SLNT to offer their assistance.

Some members also conveyed a need for more agencies, whether NGOs or government departments, to adequately fulfill their functions and speak up about the negative implications of unbalanced development taking place on the island. They went on to say that the Trust should not be the sole organisation addressing these issues as tax payers dollars are used to fund some of these agencies.

One of the most anticipated agenda items, the election of Councilors, was fulfilled. Out of the 11 nominees, the following 7 were elected: Nadia Cazaubon, Sean Compton, Calixte George Jr., Finola Jennings-Clark, Alison King, Lisa Louis-Philip and Christine Parris.

Other highlights of the Trust’s AGM were the display of a photo collection from the heirs of Eldon Cyrille Theodore depicting life in Saint Lucia and more specifically Vieux Fort in the 1950s, 1960s and 1970s; an exhibition by the Trust in collaboration with the Aupicon Charcoal Producers which highlighted the livelihood activities currently taking place within the Pointe Sable Environmental Protection Area, as well as a display on our White Breasted Thrasher project.

The Trust thanks members, non-members who signed up at the meeting, invited guests and the media for their attendance and active participation at its 41st AGM. The organisation reaffirms its commitment to conserve Saint Lucia’s rich natural and cultural heritage and calls on all Saint Lucians and friends of this fair island to support its efforts however possible.

Call 452-5005, email membership@slunatrust.org, visit www.slunatrust.org or search for ‘Saint Lucia National Trust’ on Facebook for more information about our work and how you can become a member.