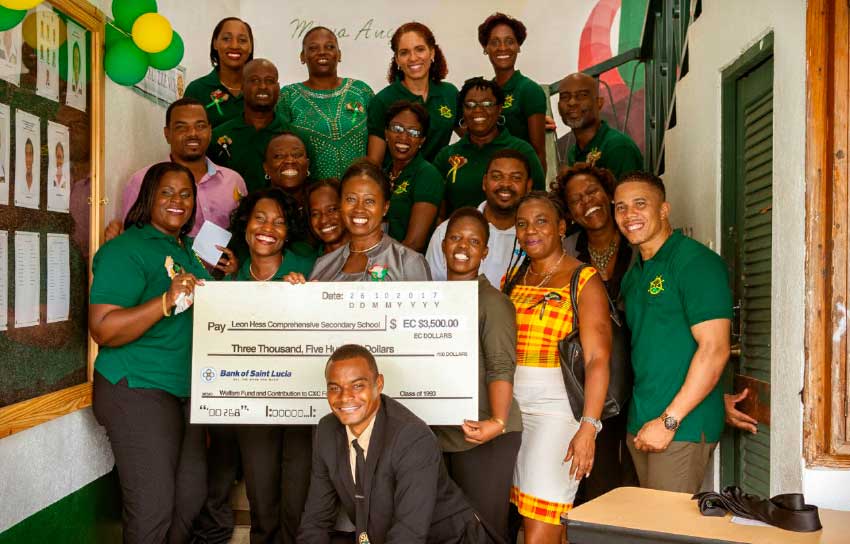 PRESS RELEASE – JULY 8, 2018 will mark 25 years since approximately 150 graduates of the ‘Class of 1993’ bid farewell to their alma mater, Leon Hess Comprehensive Secondary School (LHCSS). The established theme to commemorate this milestone is Celebrating 25: Rekindling Friendships, Reliving Memories, Giving Back!

This is indeed a momentous occasion and what better way to launch this celebration than to do so officially at the 32nd Anniversary Assembly of the LHCSS which was held on Thursday, October 26, 2017.

Chairperson of the Planning Committee, Merlisa Joseph-Charles, addressed the gathering on behalf of the group. She spoke to the school’s motto – “Education for Service”, impressing upon students the importance of service. The gathering was further informed of how elated Class of 1993 was to fulfill the simple, yet powerful, motto and ‘serve’ the LHCSS after being educated at such a prestigious institution.

A cheque of $3,500 was presented to Rohan Lubon, Principal of the school, to assist students through the Welfare Fund (which addresses causes like the payment of transportation and CXC fees). In addition, a noticeboard, which will be used to highlight the top achievers at Annual Graduation Ceremonies, was unveiled by Florence Gustave-Denis, Vice-Principal of the school. The noticeboard was sponsored by the group and built and installed by representatives of Class of ’93 — David Medard and Spencer Myers.

The group has pledged its commitment to sponsor “The Spirit of Leon Hess Award” for the next five consecutive Annual Graduation Ceremonies. Joseph-Charles pointed out to students the significance of this Award: “This means that one of you, yes, one from each form (form one through to form five) will receive an award on graduation day from ‘Class of ‘93.”

As part of their fundraising ventures, the group organized a raffle draw for a dinner for two at the Royalton Hotel (authorized by the National Lotteries Authority of Saint Lucia). The draw took place on the day and Latoya Thomas emerged the winner. The proceeds from this fundraiser enabled the group to finance these outreach activities.

The planned outreach objectives go beyond assisting the school. Class of ’93 is taking into consideration their fellow colleagues and former teachers who may need assistance in some way or another. The group intends to make monetary contributions in that regard.

The students were urged to give of their best and strive for excellence in all their endeavours. Joseph-Charles encouraged the students to support upcoming fundraising activities of the group and to share the information with their family and friends.

Vincent Lubrin and Leviticus Andrew were thanked for their contributions to the noticeboard.

The group is grateful for the invaluable advice offered by Veil Tobierre and Terroll Compton, past students of the school, and as Class of 1993 leads by example, their intention is to set the platform for other past students to support and give back to their alma mater, LHCSS.