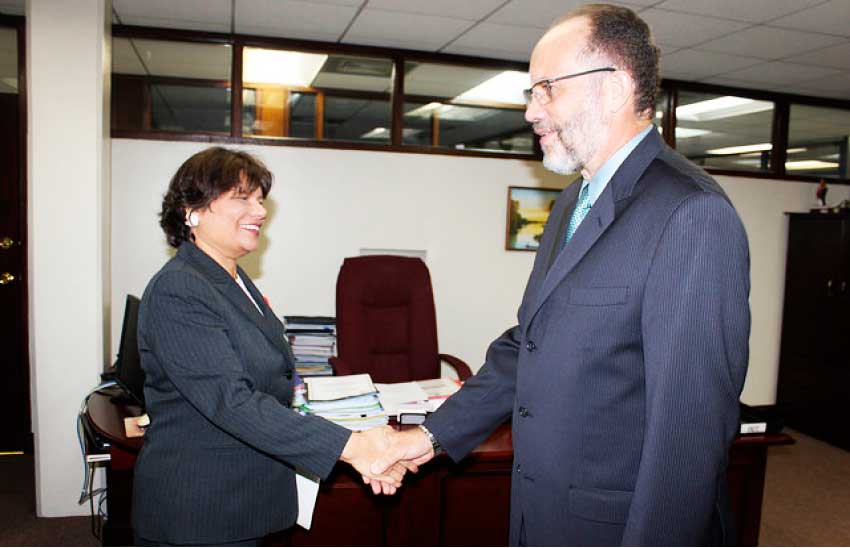 PRESS RELEASE – Canada has confirmed its participation in the upcoming CARICOM-UN Pledging Conference for the CARICOM countries devastated by the two recent Category 5 hurricanes, Irma and Maria.

New Canadian Ambassador to CARICOM, Lilian Chatterjee, made the commitment while presenting her credentials to CARICOM Secretary-General General Ambassador, Irwin LaRocque on Tuesday.

CARICOM, with the help of the United Nations Development Programme (UNDP), will hold the High-Level Pledging Conference on November 21 at U.N. Headquarters in New York. The objective is to mobilise support and commitment of pledges to help the devastated countries to build back better and fulfil the vision of being the first climate-resilient countries in the world.

“The increased intensity and frequency of these mega-storms, fuelled by climate change, is our new reality for the foreseeable future,” the Secretary-General reminded in his remarks at the accreditation ceremony.

“We are living climate change. It poses an existential threat to our region. It, therefore, demands that as the most natural disaster-prone region in the world, we try to ensure that our countries are more resilient to adapt to and to mitigate the effects of climate change,” he added.

He also praised Canada’s understanding of one of the Caribbean Community’s major rebuilding challenges, that is, denial of access to concessional development financing due to the use of per capita income as a primary criterion. Many CARICOM Member States are categorised as middle-income countries and are, therefore, ineligible for such financing, he noted.

Ambassador Chatterjee noted that while Caribbean nations and other SIDS have taken some important steps to develop more climate-resilient infrastructure, there is clearly more work to do.

“Canada remains committed to working with partners in the region to build the best possible future for the Caribbean,” she assured.

Canada has already made significant contributions to the affected countries and to the Caribbean Disaster Emergency Management Agency (CDEMA) – the CARICOM Institution at the forefront of the relief and recovery effort.