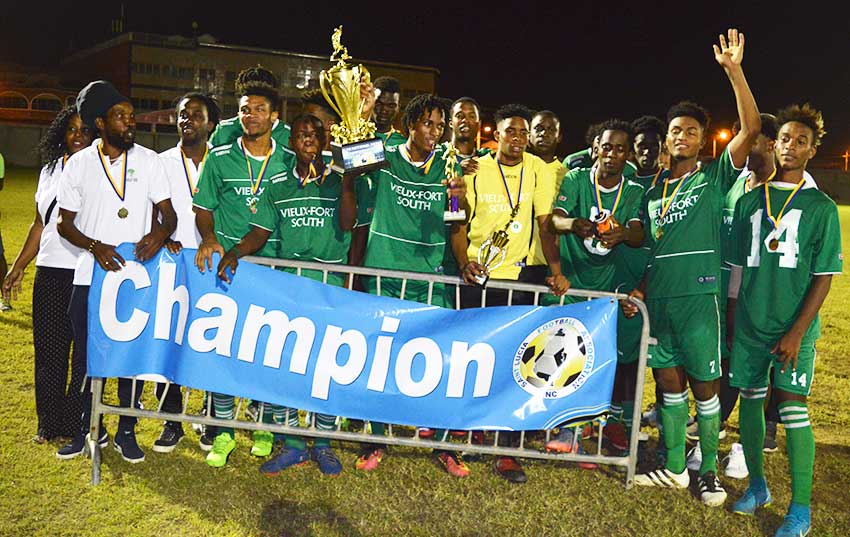 ANOTHER national championship glory has gone to the south of the island, this time for the Saint Lucia Football Association Under-23 title played on Saturday evening at the Phillip Marcellin Ground.

Vieux Fort South opened the scoring in the 6th minute of play when Noah Nicholas received a free ball to shoot home the opening goal to the left of the Micoud custodian Noah Didier.

The atmosphere was electrifying as usual and so, too, the rivalry between the two neighbours throughout the half.

Didier was kept busy between the uprights, coming up with two spectacular saves as the quartet of Noah Nicholas, Antonious Myers, Jevic Mc. Farlane and Antonio Myers kept the Micoud defense on the back foot.

Micoud, too, had two early opportunities as VFS custodian Leon Alexander failed to collect the ball in a proper goalkeeping fashion; one from a corner and the other from a right foot shot just inside the 40-yard area.

With ball possession moving from one side to the other, the scoreline remained 1-0 at halftime.

Following the break, both teams upped the tempo, but VFS’ prolific striker Antonio Joseph made it 2-0. Despite Micoud’s fighting efforts to at least equalize, the score remained the same.

For the third place silverware, between Gros Islet and Anse la Raye, Gros Islet went on to win 5-3 in a penalty shootout after the scores were locked at 1-1.

Anse la Raye opened the scoring after ShervonEleuthere’s well-driven right foot shot from 50 yards hit the back of the nets in the 36th minute.

Going into the second half of play, Gros Islet, with only 10 players battling it out, kept their chances alive as Melvin Doxilly’s 80th minute goal sent the game into a penalty shootout to decide the winner.

Charde Desir, 1st Vice President of the Gros Islet Football League that travelled with the team to Vieux Fort said, “I am disappointed in the behaviour of our players. We received no report of any player been injured, and no one alerted him of their non-availability for this encounter. For sure, a report will be written and disciplinary action will be taken against the players that did not show up. Gros Football League does not support such behaviour.”