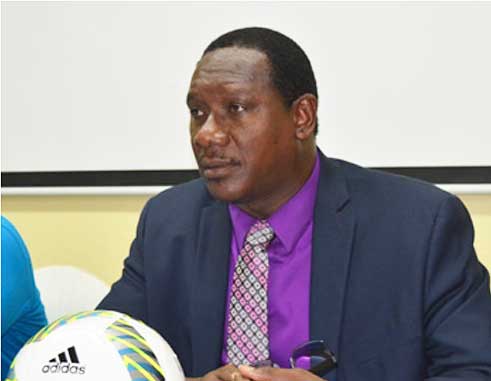 PARLIAMENTARY representative for Gros Islet, Lenard Montoute, recently told sportsmen and women that the time has come to stop vandalizing sporting facilities in the north of the island.

Montoute, a former sports minister, was at the time addressing representatives from the thirteen teams present at the official launch of the District Representative football tournament dubbed “Spider Cup” held in collaboration with the Gros Islet Football League and sponsored by the National Lotteries Authority.

He said, “With regard to the upkeep of the playing facilities in the north of the island, we recently appointed caretakers for Gros Islet, Corinth and Grande Riviere playing fields, to also include the Reduit playing field. As time goes on, residence in the north will see a lot more investment for sports in Gros Islet.

“Apart from the lighting that exists on the Gros Islet and Grande Riviere fields, it is our intention to light the Corinth playing field and, subsequently, the Monchy Playing Field.

“Lighting of the various playing fields will give a greater opportunity for training and competition; it will also provide better opportunities for us in staging our various competitions and making greater use of the facilities year-round.”

Montoute appealed to sportsmen and women in the north of the island to recognize whatever facility that is set up, saying that while it is government’s responsibility to maintain them, it is theirs to take care of and not vandalized and abuse them.

“Too often we have to spend the little resources we have on facilities that already exist, whereas we could have put those resources into getting additional or new facilities,” he said.

He singled out the fencing at the Gros Islet playing field, the changing rooms that are always being vandalized and the condition of the playing area at times.

Montoute continued, “You find all type of debris on the playing surface and many times it is sportsmen and women themselves who are guilty of that act.”

He said sponsorship for sports, in particular, is dwindling more and more, and that adopting the principle of volunteerism would go a long way in helping to solve the problem.

With a serious look on his face, Montoute said, “Especially in the Gros Islet area, when I see vandalizing of public facilities, I always remind the young men that I do not know many government officials who play sports. The facility is yours and the extent to which you preserve it will be to your benefit and it will also provide the administrators and the policymakers with a greater opportunity to provide better facilities for you.”