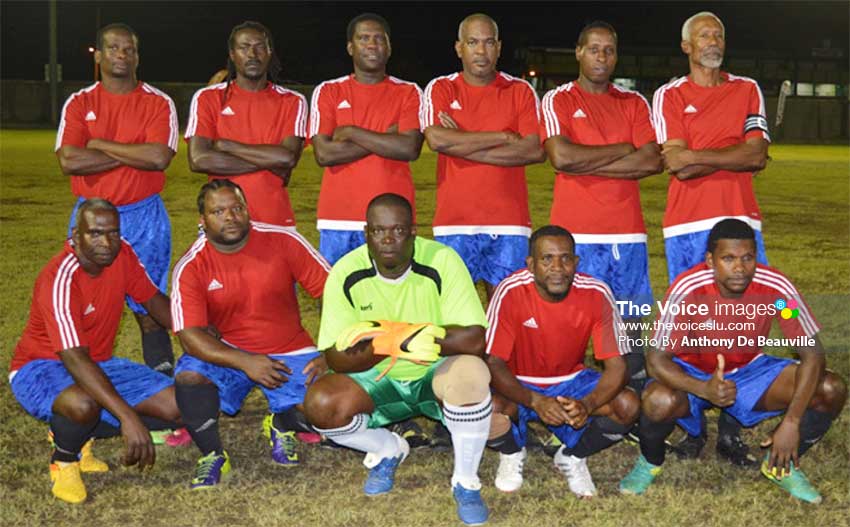 THE much-anticipated excitement, fun, laughter and friendly rivalry in the 2017 Veterans in Sports Inc qualifiers started on Sunday evening at the popular Phillip Marcellin Grounds in front of an appreciative crowd.

To date, 16 teams have already secured spots in the tournament, with just four spots up for grabs. The final six teams are currently playing in this round with the hope of gaining one of the final four spots available.

In the first encounter played, La Clery took on Labowe Connections. The latter went into half- time leading by 2-0 with goals from Nathan James (39th minute) and Justus James (43nd minute).

On the resumption, La Clery came out firing and found the back of the net in the 55th minute through Kurt Nicholas to make it 2-1.

Despite their age, the Labowe Connections looked fit and played like Under-23 players as they outclassed the La Clery players with familiar names in their line up — Nicholas Lawerence, Marcus George, Tony Paul, Jerry Charles, Darren Fessal — who at that point of the game looked battered and bruised as LaboweConnextion were coming at them in all facets of the game, only to enjoy a 65 percent ball possession and create a number of scoring opportunities, one of them hitting the uprights.

It was all to play into injury time, and La Clery had a golden opportunity to equalize, but Nathan James extended LaboweConnextion’s advantage in the 94th minute to give his team a 3-1 victory.

In the second qualifier, between Canaries and Choiseul, Canaries nosed ahead in the 6th minute of play from the penalty spot after a foul was committed on a Canaries player which saw Stanly Mitchel scoring in the 6th minute. Three minutes into the game, Choiseul had squandered an easy opportunity to get things going.

On the resumption, despite some yesteryear brilliance on the pitch by the Choiseul team, it wasn’t their night as they failed to convert their many chances at various intervals. Canaries, too, had their chances in front of goal and, like Choiseul, some of the shots taken to goal went wide.

Matches in the qualifying round continue tomorrow evening at the PMG. From 6:00 p.m, Marchand Veterans play LaboweConnextions while Vieux Fort North will take on Choiseul at 8:00 p.m.