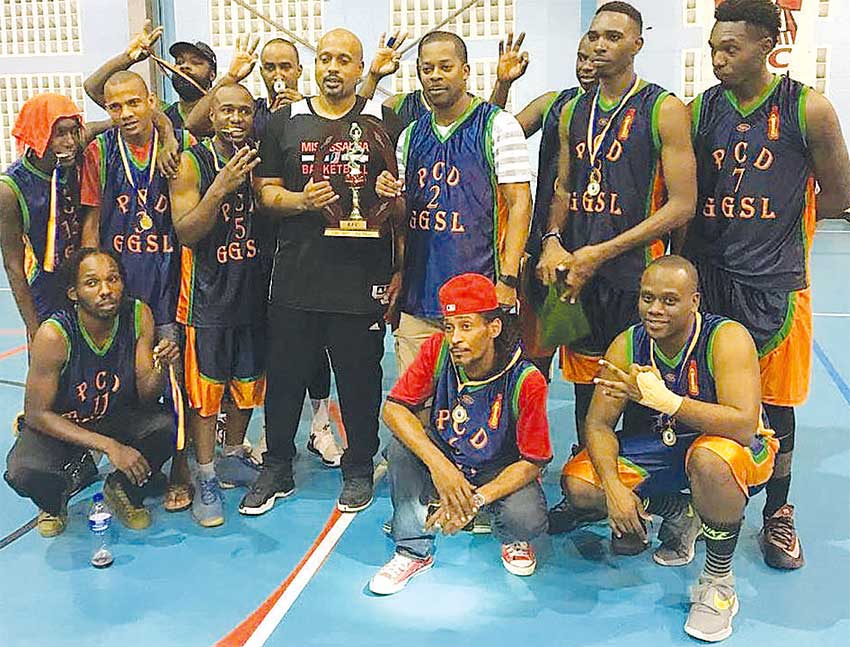 THE curtains came down on the 2017 KFC Commercial Basketball League with four exciting and nail-biting matchups at the Beausejour Indoor Practice Facility at the weekend.

On Saturday evening, after losing their closely-contested semifinal games the day before, Fire Service and CSA did battle in a third place game which was decided in the final minute.

The Fire Service, despite starting off with a bare minimum of 5 players, took a 19-17 lead at the end of the first quarter.

The arrival of formidable centre Marcian Calderon and other Fire Service players in the second half changed the pace of the game, forcing the CSA team to start firing on all cylinders. Despite that, the Fire Service held on to a 5-point lead, finishing the first half with 34 points to the CSA’s 29.

The fourth quarter began with a 54-39 lead, but a balanced attack and solid defensive plays led by Ron Dumurville and Lanse Prospere, including Prospere’s go-ahead basket with little over one minute to go, gave the CSA a 2-point lead and they never looked back.

The CSA’s 68-66 win was led by KFC Player of the Game Ron Dumurville’s 31 points and 3 steals. LanseProspere finished with 19 points and 5 rebounds for CSA.

The final game of the competition was a high-scoring affair between defending champions PCD and the newly-formed Financial Services All Stars team.

The Bankers, though holding the height and size advantage, could not overcome the onslaught of the brothers Troy (26 points) and KFC Player of the Game Andre Louison (33 points 12 rebounds, 5 assists) who cut, slashed, rebounded and shot their way to an 84-72 win for the defending champions, giving them the most championships (3) in the history of the KFC CBL.

Meanwhile, on Friday evening, in the first semifinal matchup was defending champs PCD/GGSL versus the Saint Lucia Fire Service.

The first half of the tight matchup ended with PCD leading 26-25. The competitiveness of both teams continued in the second half. The KFC Player of the Game Andre Louison drained three consecutive shots from behind the arc late in the fourth to secure a lead. Despite this and losing two of their men to injuries, the Fire Service did not let up. However, PCD/GGSL eventually won the game 61-57. Andre Louison finished the game with 28 points and 6 rebounds.

Marcian Calderon led the SLFS with 24 points and 19 rebounds.

The second semifinal game — and what many called the “finals game” — was a highly-anticipated battle between the CSA and Financial Services All Stars. It in no way was disappointment to the fans as these teams went head-to-head from start to finish.

The high-energy game saw both teams trading baskets with Financial Services leading 28-27 at the half.

Neither team let up the energy after the half, ending the third quarter tied at 49-all. The tandem of CSA’s Ron Dumurville (12 points, 6 steals) and Keegan Preville (22 points, 8 rebounds) was not enough to overcome the Financial Services team led by KFC Co-Players of the Game Marlon Samuel (17 points, 12 rebounds) and Rahim Auguste (14 points, 8 steals and 6 assists).

According to SLBF, the individual awards will be presented at a subsequent ceremony.
The SLBF also wishes to express heartfelt thanks to all those who made the 2017 KFC CBL possible.