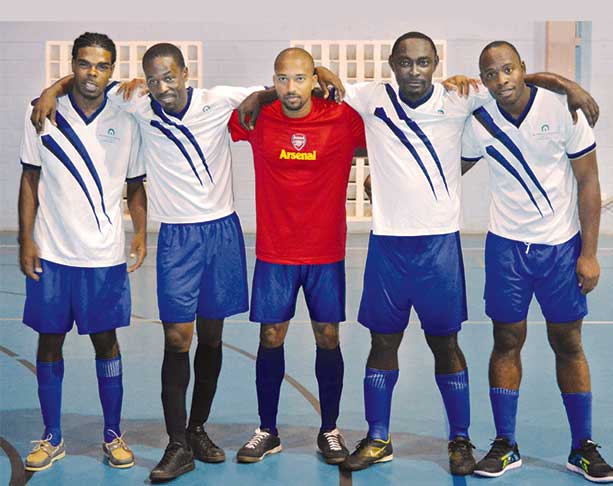 THE 2017 Corporate Warfare Futsal League has recorded a whopping 14 goals after two matches on the opening night in front of a supportive crowd of fans.

In game one, Windjammer Hotel had a hard-fought win over newcomers the Royal Saint Lucia Police Force 4-3.

Windjammer led 3-0 at the halftime whistle as they mesmerized the lawmen before they got into the Futsal groove.

The RSLPF upped the tempo a notch after a talk from Manager Travis Chicot and Coach Alvin Faucher following the halftime break. The strategy was not to dribble, but to find the open space and strike to goal.

For once, the lawmen listened, as they had two quick strikes to cut the deficit to one and found the much-deserved equalizer as Nikel Emmanuel scored the tournament’s first hat trick. But Windjammer took the lead shortly after to claim the victory.

Police failed to put away three easy scoring chances, one of them a one-on-one with the Windjammer goalkeeper which Shervon Charles squandered in the dying moments of the match.

This evening, the showpiece continues at the BIPF as from 6:30 p.m. Caribbean Metals will come up against Courts, Saint Lucia Air and Sea Ports Authority (SLASPA) play Sandals at 7:30 p.m. while Goddard Group/PCD take on CPJ at 8:30 p.m.