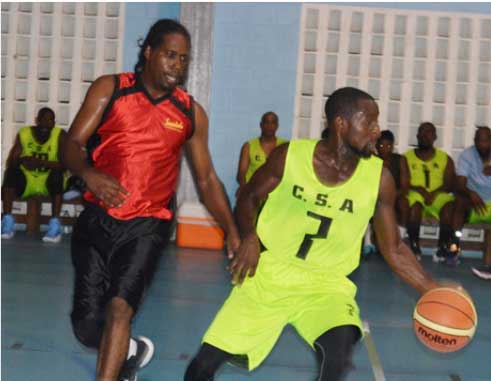 THERE was no surprise last weekend with the four semifinalists decided when the action continued in the KFC Commercial Basketball League at the Beausejour Indoor Practice Facility. There were victories for defending champions Goddard Group/PCD, CSA, Financial Services and Saint Lucia Fire Service.

In the first of the match-ups on Friday evening, Goddard Group/PCD made light work of Media Ballers, following a tentative start which saw the first quarter being tied 18-18. However, by the end of the first half, they lit up the contest as they closed 43–26 outscoring Media Balers 25-8.

Following the halftime break, there was no letting up as the defending champions stamped their authority with a 37-20 rampage to blow out Media Ballers by 80-46.

Goddard Group/PCD was led by the twin towers, Andre Louison (28 points and 9 rebounds) and Troy Louison (24 points, 6 rebounds and 4 steals). They were assisted by Ali Quinlan (10 points and 6 rebounds).

For Media Ballers, Elijah Williams put on a commanding performance with 19 points and 56 rebounds. Arthur Tisson contributed 11 points and 11 rebounds while a quiet Paul Hippolyte could only manage 10 points.

In the second game played, title contenders CSA showed their poise and class as they defeated Sandals High Fliers 75-56 to clinch a semifinal berth. The game was played in two segments as after the first half CSA held the slight advantage 38-36 after the first quarter was deadlocked at 20-20. However, the game really came alive in the second half as CSA got their rhythm going with a 36-20 points spurt.

The main contributors for Sandals High Fliers were Simeon Jim Medard with 17 points and Kyanni Elwin with 10 points.

On day two of the quarterfinals, the action remained riveting. Financial Services All Stars had a field day against the Royal Saint Lucia Police Force/Combined Forces as they thrashed them 84 47 to advance to the semifinals.

Despite the tentative first quarter, they never relinquished their stranglehold as they demonstrated that come the semis, they cannot be taken lightly. Their cause was helped by Marlon Samuel (30 points), Shamoir Jn. Baptiste (16 points and 5 steals) and Mervin Sealy (10 points).

Leading the way for Combined Forces were Durocher Antoine (12 points) and Ulric Joseph (10 points and 8 rebounds).

The second game was a close and fiercely contested one between Saint Lucia Fire Service and WASCO which went down to the wire. The first half was a nail-biter which ended in a stalemate at 28-28.

The third quarter was extremely close with Fire Services slightly forging ahead 21-20 to close at 39-38. The final quarter, which proved very decisive, saw Fire Service pulling away 16-13 to advance to the next round. Final score: 55-51

For Fire Service, Jerry Charles had a hot hand of 19 points. He received valuable support from Marcian Calderon (18 points and 11 rebounds) and Owen Cazaubon (10 points and 13 rebounds).

For WASCO, Tristan James had a game high of 31 points, 6 rebounds and 5 steals, with Marlon Brouet chipping in with 13 points and 7 rebounds.