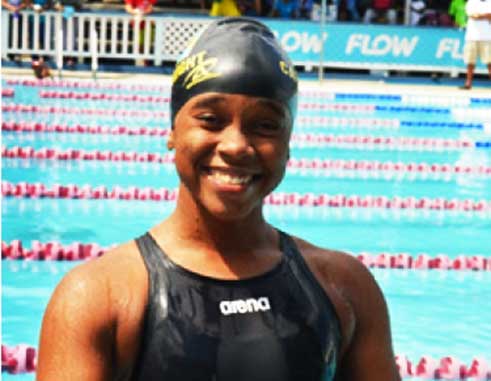 AHEAD of the 27th edition of the Organization of Eastern Caribbean States (OECS) Swimming Championship at the Rodney Heights Aquatic Centre on November 10-12, the Saint Lucia Amateur Swimming Association (SLASA) has selected its male and female captains to lead Saint Lucia’s campaign.

The female team will be captained by Mikaela Casimir of Sharks Swim Club. In the Girls 15-17 category, Casimir finished 1st in the points ranking at the recently-held Capri Sun/OECS Time Trials organized by Sea Jays Swim Club. She is also SLASA’s senior female swimmer of the year for 2016.

Jamarr Archibald of Sea Jays Swim Club will take charge of the male team. Archibald placed 3rd in the points ranking in the Boys 13-14 age category at the recently-held Capri Sun/OECS Swim Trials.

The coaching staff includes head coach John Mc. Lennon, who will be assisted by Sherma Henry and David Peterkin.

In 2016, the championship was held in Saint Vincent and the Grenadines at the Shrewsbury Aquatic Centre and with the most accumulated points, defending champions Grenada retained their OECS Swimming Championship title, followed by Antigua and Barbuda in second place with its best-ever finish in the swim meet’s history.

Saint Lucia, Martinique, and Saint Vincent and the Grenadines rounded out the top five.

SLASA is grateful to the coaching staff and team who have taken the initiative to lead this group of swimmers to this year’s championship.

Meanwhile, the corporate and private Saint Lucia is encouraged to invest in the youth by supporting the swimmers at this year’s OECS Championship.