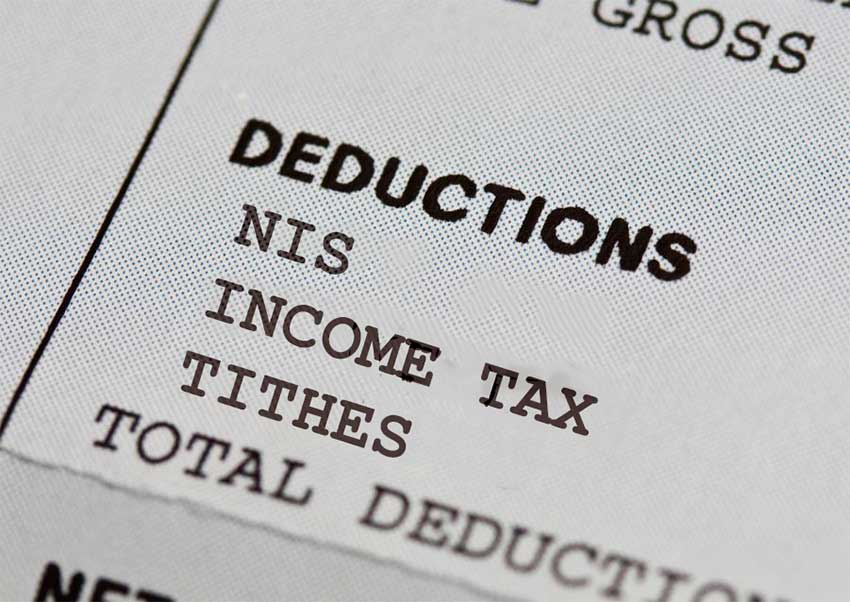 AN anonymous insider is calling out the Seventh-Day Adventist Academy and its executive on a litany of matters. However, the accused are firing back.

Last week, the insider visited The VOICE with news of numerous issues plaguing the school, located in Sunny Acres, which is a product of the Seventh-Day Adventist Church.

The source explained and provided documents in an effort to back up their claims which, among others, suggested misappropriation of funds and insubordination from one member of staff towards the school’s principal, Claudia Fevrier, as well as illegal salary deductions.

Addressing the matter of salary deductions was an issue which was allegedly vehemently opposed by the school’s principal, who believes that tithes should be given with a cheerful heart and not forcefully taken by employers as part of protocol or policy.

The principal, according to the source, revealed: “When the post was advertised, there was no mention about tithing. But when the contract came, one month after Mrs. Fevrier took up the post as principal, it included the clause which said that they would deduct 1/10 of her salary for tithes.”

The insider said at that time the principal felt trapped as well as duped because she was already working for one month and had already turned down other job opportunities before she was blindsided with the contract which she felt she had no choice to sign.

The source revealed that the principal visited the Labour Department with regards to the issue of salary deductions which, according to staff contracts signed by the Executive Secretary Pastor Roger Stephen, states: “Please note that statutory deductions as well as God’s Tithe (10% of your income) will be deducted as is the practice of the organisation.”

Upon raising the matter with the Labour Department, the source said that the principal was told that under no circumstance, unless full consent is given, must monies be deducted from staff salary.

The VOICE contacted the St. Lucia Labour Department, which confirmed the above statement, saying that the act of salary deductions without due permission is indeed illegal.

According to the St. Lucia Labour Code, Section 51:

“Deductions of payment in respect of fines restricted
51. Save with the prior approval of the Labour Commissioner, an employer shall not make any deduction or make any agreement with an employee for any deduction from wages or for any payment to the employer by the employee by way of fine for bad or negligent work, for damage to the materials or other property of the employer.”

Regarding the issues with another staff member, according to the source, there has been tension brewing between the school’s principal and one member of staff, who has reportedly shown repeated acts of insubordination towards Fevrier during the principal’s four-month stint in the position.

Reportedly, the list is a long one, with incidents including refusal to follow instructions when dealing with important documentation, speaking in a rude manner to the principal, being sarcastic.

Perhaps one of the most damning accusations made about the said member of staff is that of misappropriation of school funds. On this matter, the source described how the problem came to light after the staff member allegedly used $40 that was paid in by a student for his phone which was confiscated (as is customary at the school).

The source revealed that after the principal questioned the member of staff regarding the missing monies, she responded by saying that she used it. However, after she was questioned by the executive, she changed her story and said that she gave it to a parent in need, but with full intentions of paying it back.

The insider said: “Regardless of what she took it for, whether it was for herself, stealing is stealing.”

These issues were further highlighted in a letter brought to The VOICE, dated August 4, which was written and signed by the school’s Education Director, Elsie Samuel, stating in part:

“I have to inform you that the minutes of the meeting held July 11th, 2017 at the St. Lucia SDA Academy, which was called to discuss matters related to your insubordination to the Principal, Dr. Claudia Fevrier, and the misappropriation of funds were reviewed. I commend you for the level of humility displayed during the meeting, and your willingness to offer an apology for your actions which you concluded were inappropriate. Notwithstanding, the board will take the final decision on this as mishandling of funds and insubordination are totally unacceptable in the organisation.”

Allegedly, the principal has gone to the Mission and spoken to the head of the executive about said staff member on a number of occasions, stating that she is a major obstacle in the way of the school’s progress, but was in turn vilified for speaking out and was even issued with two warning letters, one from the President of the Mission and one from the Education Director.

This, according to the source is a common occurrence, as individuals who have spoken out in the past have felt the wrath of the executive for doing so, including a former principal who was allegedly fired, as well as a teacher who was subsequently and inexplicably made part-time following her complaints of the same staff member, and to date is allegedly the only part-time teacher employed at the school.

According to the source, many teachers have left the school and parents have removed their children from the school due to the employee’s behaviour and this has led to the belief that this employee has some sort of hold over members of the executive.

The source said: “Parents are swamped and overwhelmed and overburdened with her attitude towards them.”

Allegedly, a group of parents have even gone as far as filing a petition to get said staff member ousted for her long running issues.

Meanwhile, the principal, according to the source, is being victimised, but is standing firm and is ready to fight, even if it means taking her fight to the public forum and out of the shroud of secrecy that the Mission is used to operating under.

The VOICE spoke with the school’s Education Director; Pastor Vincent Emmanuel; and Cletus Burton, Chair of the Education Reform Committee and parent of a student who attends the school.

Emmanuel said there is an admitted attempt to sully the image of an institution that has been serving St. Lucia for over 50 years and has blessed the lives of people who would otherwise not have an opportunity at a second chance in life.

The trio said a similar attempt was made in another newspaper recently; however, the matter was dropped by the news agent after the editor met with them and the full story was told.

Emmanuel said: “I perceive this is an attack from the enemy. There is a calculative effort and the individual must have known that what was attempted seems to fail, so let us move on to media hopping, where if they don’t succeed one place, they will move on to another media house.”

Concerning the tithes, the Pastor said there was no need to make this a public matter as it was an internal issue which could have been easily been resolved had the principal approached the relevant sources of the board in order to have the automatic tithe deduction stopped.

Samuel said: “This was mentioned verbally to her prior to this (contract), and on the date this was given to her, which was the day after. She did mention the tithe and I told her, yes, this is the church’s policy. She did mention that she should give cheerfully, but when it was explained to her that it’s not just done in St. Lucia but done across the board in the Caribbean Union, she said, ‘Well if that’s the case, it’s ok.’”

The three said that while this is not a matter they would like to speak on publicly, they felt it necessary to clear the name of the Academy and to allow the public to make a fair deduction of the issues at hand.

Samuel went further to reveal a 14-page log of the issues mentioned by the insider.

Rebutting the insubordination matter, she said the tensions began between the school’s principal and the staff member after Dr.Fevrier’s nephew was not hired for a teaching position at the Academy.

Samuel said this was not done through malice but because he was not fully qualified for the position.

The trio said Dr.Fevrier’s behaviour is where the problem lies and it was not fair that she is blaming other staff members for her attitude.

While they did agree that the misappropriation of funds was raised and condemned, they believed this was not a cause to terminate someone who has worked with the Academy for over six years.

After revealing numerous cases of verbal insubordination from the principal towards the ED, they are hopeful that the matter can be resolved in an amicable way without going down the current route that it is already on.