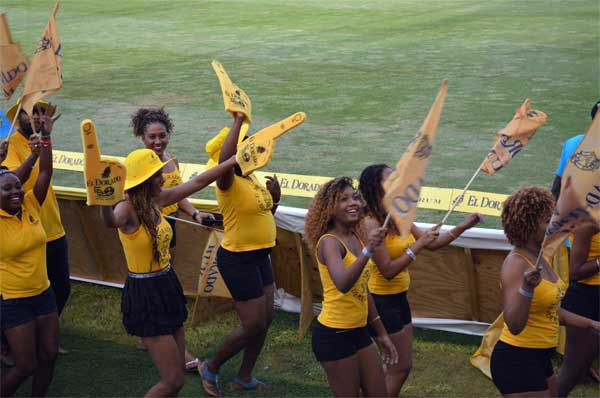 EL Dorado Rum, the official spirit of the Caribbean Premier League T20, is pleased to announce the winner of the “Happiest Fan Alive” competition from Saint Lucia.

The contest, which was held during the CPL T20 matches played at the Daren Sammy Cricket Ground at Beausejour, Gros Islet, enticed patrons to allow the cameras to capture them in all their element and costumery enjoying the game. In the end, the camera crew selected Samantha Reid as the most exciting fan during the games here.

Samantha Reid and her companion of choice will be flown to Trinidad & Tobago for the CPL T20 finals, where she will join the winners from the other territories of Guyana, Barbados, St. Kitts, Jamaica and Trinidad and Tobago where the contest was also held.

The all-expenses paid trip for two include airline tickets, ground transportation, hotel accommodation, meals and tickets to the game.

During the Saint Lucia matches, El Dorado also endorsed a drinks promotion with vendors. Patrons purchasing El Dorado Rum on special were given a chance to win a barrel of El Dorado Rum. Shernelle Mc Donald was the lucky winner of this promotion.

Germaine Serieux, Brand Manager of El Dorado Rum, thanks the fans for their overwhelming support and enthusiasm reflected during the games here.

“We also want to thank the organizers, as well as the vendors, who participated in the El Dorado specials on match days for partnering with us,” Serieux said.

Peter & Company Distribution, the Saint Lucian home for El Dorado Rum, says the investment of US$20,000 as part of a renewed partnership this year between CPL and El Dorado, a world- class Caribbean product, was reflected in the sense of pride and renewed passion among the fans.

The Guyana Demerara Distillers-owned rum brand continues as the official spirit of the Twenty20 island franchise tournament until 2022. El Dorado has been a CPL sponsor since the inaugural competition in 2013.

The 2017 CPL season kicked off here in Saint Lucia on August 4 and will culminate on Saturday, September 9 at the Brian Lara Stadium in Trinidad. Described as the “Biggest Party in Sport”, the final will feature a performance by soca superstar, Machel Montano.