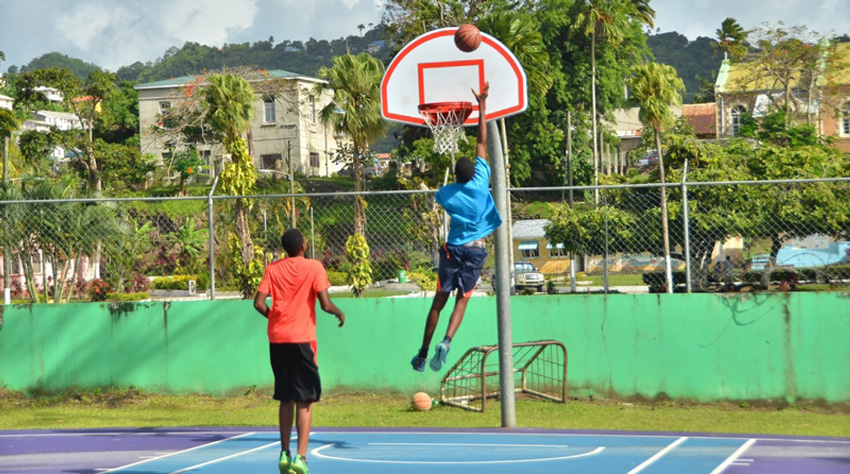 THE Sandals Foundation has again committed to supporting the Saint Lucia chapter of the Game Changer Programme, “Basketball for the Future”, which is run by Ron Du Murville at the Kenneth “Wriggler” King Multi-Purpose Complex for a second year in a row.

The Programme has introduced and supported basketball and a number of other sporting disciplines to youth within the Caribbean islands through partnerships with sports celebrities and professionals such as Dwyane Wade, NBA All-Star; Dwayne De Rosario (DeRo), Canadian footballer; and Darrelle Revis, NFL cornerback.

The Foundation has also refurbished a number of courts in the region, including the basketball court at the Kenneth “Wriggler” King Multi-Purpose Complex.

In Saint Lucia, and under the tutelage of Ron Du Murville, the “Basketball for the Future Programme” has seen the number of children participating increase to 75 since it started. Run from Monday to Saturday, sessions include basic ball handling drills, shooting drills, defensive drills, learning the rules of the game, passing drills, fitness drills and matches as required.

Said Coach Du Murville: “In its recent history, “Basketball for the Future” has already hosted a 3×3 basketball tournament. We also host camps for Easter, summer and Christmas. Within our basketball programme, we have a big involvement of past national players and coaches. They assist in the development of the game for the athletes and provide much-needed guidance in life off the court.

“The programme has seen a number of major highlights, including the increased numbers of children using the court. Many of our children playing basketball within this programme are capable of earning sports and academic scholarships and some are members of the national team.”

Horace Popo, father of Nathaniel Popo, spoke highly of the programme: “I wanted to give my son early exposure to what the game is about in a structured way. I loved it, but I grew up playing basketball on the side of the road. I wanted to give him an opportunity to learn the game from someone who knows how to do it well, and not just to watch it on television.

“I think the Complex is the mecca of basketball in Saint Lucia and I thank Sandals Foundation for helping to make that happen through the refurbishment. I played there as a young man. Many national players came from there – maybe even the first, second or even third generation of players.”

Sport is an important avenue for development of young people and, as such, The Sandals Foundation continues to deliver on its promise to the development of the children across the Caribbean.

Recently, under the Game Changer Programme, student athletes also received over 11,000 pairs of innovative Stable 26 basketball socks valued at US$311,000 to boost the Game Changer initiative. These socks provide multi-direction stability and targeted cushioning to optimize court performance. In Saint Lucia, socks were officially handed over during a small ceremony held at the Kenneth “Wriggler” King Multi-Purpose Complex, and Ron Du Murville and the Game Changer Basketball for the Future Team were among the recipients.

In summing up the results of the Basketball for the Future, Du Murville said: “I am happy at the level of involvement that we give the parents. They can see the growth and development of their children while participating in activities created by the club such as barbeques, ball-o-ramas and cleanup programmes. We are also pleased with the contribution of the Sandals Foundation once again as this means we can impact the children for another year.”