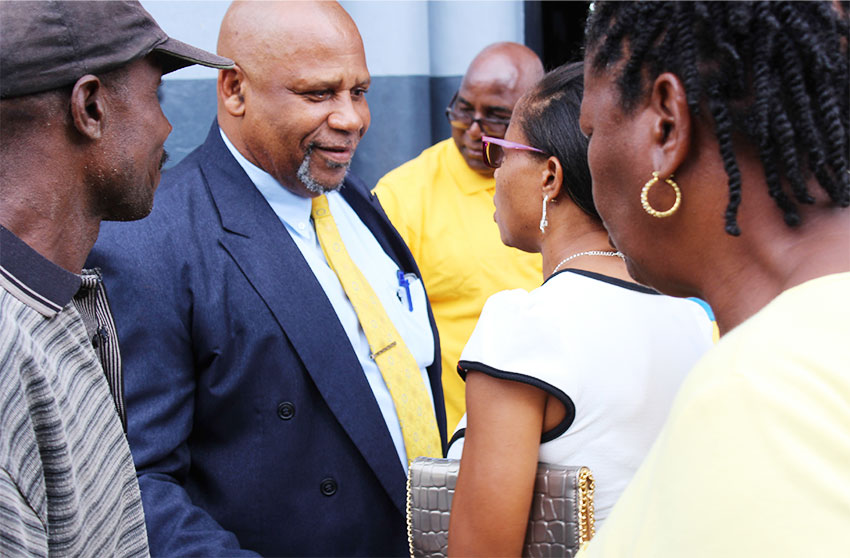 Last Tuesday marked one year since the United Workers Party (UWP) was swept into office on an unexpected wave of popularity. To mark the occasion, the party, along with Ministers of Government, attended a thanksgiving service at the Minor Basilica in Castries.

During the 50-minute service, Deacon Thomas Alexander called on the ministers and party members to put their trust in the Lord and let him guide them.

Prime Minister Allen Chastanet was not present at the thanksgiving service as he was out of state at the time. However, Agriculture Minister, Ezechiel Joseph, stood in his stead.

Joseph and Diane Felicien, President of the UWP’s Women In Action (WIA), said prayers for the nation and leaders of government. Nancy Charles, the Prime Minister’s Administrative Attaché, gave the first reading. The opening hymn was ‘Bind Us Together’ and the parting hymn ‘Open the Heart of Mine Eye Lord’.

But Tuesday was also a time for reflection on a year in which the party’s mettle — and by extension, the government — was tested as the opposition St. Lucia Labour Party (SLP) kept up a relentless attack on the government’s economic programmes.

The highlight of the opposition’s attacks on the government was a protest march last month against the government’s plans for the ‘Pearl of the Caribbean’ project earmarked for the south of the island.

The march drew thousands of protesters and was described by the opposition as “testimony to the rising national resentment at the direction in which this new government is taking St. Lucia.”

Opposition leader Phillip J. Pierre said the UWP’s year in government was one where the opportunity to do something for the people was wasted.

Although Pierre congratulated the government on surviving its first year in office, he said government wasted its time by dismantling and destroying everything the Labour Party had started.

“When we left in June of last year, the economy was showing signs of improvement. All the indicators for 2016 showed clearly that the country was on a positive trajectory. The government could have continued the airport, the Gros Islet highway, the administrative complex in Vieux Fort, the Soufriere Square and the St. Jude Hospital. I think it’s a year of lost opportunity,” Pierre said.

Infrastructure Minister, Stephenson King, and Economic Development Minister, Guy Joseph, do not share the opposition’s view, admitting that the past year had been one of challenges and successes.

King said the work of government never stops and, as such, it is all about government being relevant, current and able to deliver every step of the way.

Moving forward, he said, is about maintaining and improving the country’s infrastructure; not just for physical development purposes but to bring about the kind of needs the people are looking for.

Guy Joseph said all promises made by the party under the slogan, ‘Five to Stay Alive’ during the election campaign last year, had been fulfilled in the first year of the government. He spoke of the tax amnesty that was promised, the reduction in VAT from 15 percent to 12.5 percent, the reduction in vehicle licensing fees and other matters.

“We are not exactly where we want to be with VAT, but eventually we will get there. We are hoping that it will go down further sometime in the future. (As to) the expectation by people that the zero-rated items under VAT would have changed, there has been no change in the zero-rated items. To me, what stands out the most would be the level of confidence that is in the government and the amount of economic activity we are seeing taking place in the country,” Joseph said.

Not much has been said on the unemployment situation in the country, which the administration had promised to tackle in its first year of governance. Joseph said government had not fully analyzed the figures, hence the reason why they have not made any major statement on the subject. However, from June last year to the present, there have been some small gains in reducing unemployment levels despite the rate of joblessness remaining high.

The unemployment rate fared no better at the turn of this year, standing at 20.1 percent at the end of March. The Central Statistics Office has no figures for the second quarter of this year as yet.

It is based on these high unemployment rates that government continues to justify investment projects, including the DSH ‘Pearl of the Caribbean’ project, which has turned out to be controversial.