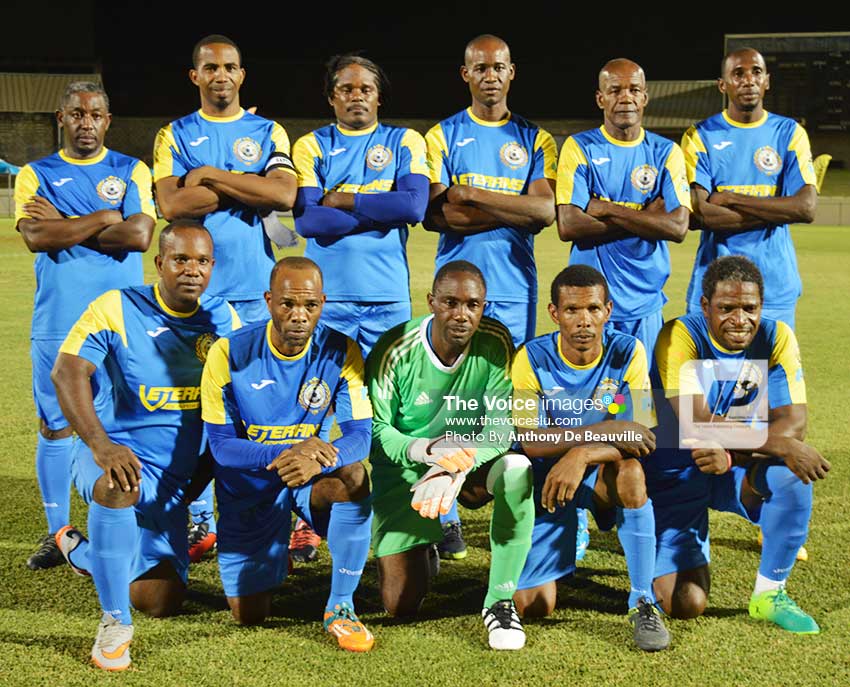 SAINT LUCIA All Stars and Saint Lucia Masters football teams are the 2017 Veterans In Sports Inc. inaugural Veterans International Invitational champions. They defeated 767 Dominica Legends and England Masters in the two matches played over the weekend.

On Sunday at the Daren Sammy Cricket Ground, Saint Lucia Masters continued their scoring spree to grab hold of the Stanley Phillip Cup as they defeated the England Masters 6-2. It was a similar goal margin for victory for the home team when they played the visitors in their opening encounter on Thursday at the same venue.

Playing under overcast skies, Alvin Malaykhan opened the scoring in the 35th minute to put Saint Lucia ahead. Trinidad-born Russel Latapy made his presence felt with two quick strikes in the 38th and 42nd minutes while Saint Lucia’s Earl Jean slammed a low powerful right foot shot which eluded the England Masters goalkeeper Phil Langridge in the 41st minute.

Jean extended SLM’s lead in the 52nd minute to make it 5-0 while former West Indies cricketer Brian Lara made amends for Thursday when he shot home the Saint Lucia Masters’ sixth goal in the 79th minute.

For England Masters, Kieron Namlin scored in the 63rd minute while John Taylor also did in the 72nd minute, taking his tally to three goals in two matches.

For the champion of champions cup and $2,000 cash prize, it was sweet revenge for Vieux Fort South as they defeated reigning Super League champions Canaries 2-1. Cyril Savery opened the scoring for VFS in the 32nd minute to start a mini celebration.

But Canaries cut short the celebration when they were awarded a penalty in the 40th minute, which David Henry put away successfully to level the score-line at 1-1 to close the first half.

VFS nosed ahead in the 84th minute through Dwayne Charles to secure the victory for his team.

On Saturday, in the triple-header played at the Phillip Marcellin Grounds, there were wins for Vieux Fort Central over Trinidad Petroleum 3-2 with goals from Jim Alexander in the 5th and 51st minutes and Stephen Albert in the 39th minute. For Trinidad Petroleum, KwesiLargen scored in the 49th minute and Ken Holder in the 55th.

In the second encounter, former Blackheart and Super League Champions Micoud defeated Vieux Fort North 1-0, a goal scored by Shane Paul in the 69th minute to take home the challenge trophy and $2,000.

In the main event on the night, Saint Lucia All Stars were kept in check by 767 Dominica Legends despite the latter losing 1-0, their second defeat in as many matches. With the scoreline nil all at the halftime whistle, it was all to play for on the resumption.

With only ten minutes in to the second half, the deadlock was broken by Layton Sandiford as he put SLAS ahead in the 55th minute to win the two-match series 4-0 on aggregate to lift the Arnold Clouden Trophy.

CEO Veterans In Sports Inc, Alvin Malaykhan, said he was pleased with the overall organization of the inaugural tournament.

He said, “This event can only get better with time. We have a number of foreign teams already looking forward to coming here and to be part of this tournament. Dominica Legends, England Masters and National Petroleum of Trinidad and Tobago will be back next year as well.”