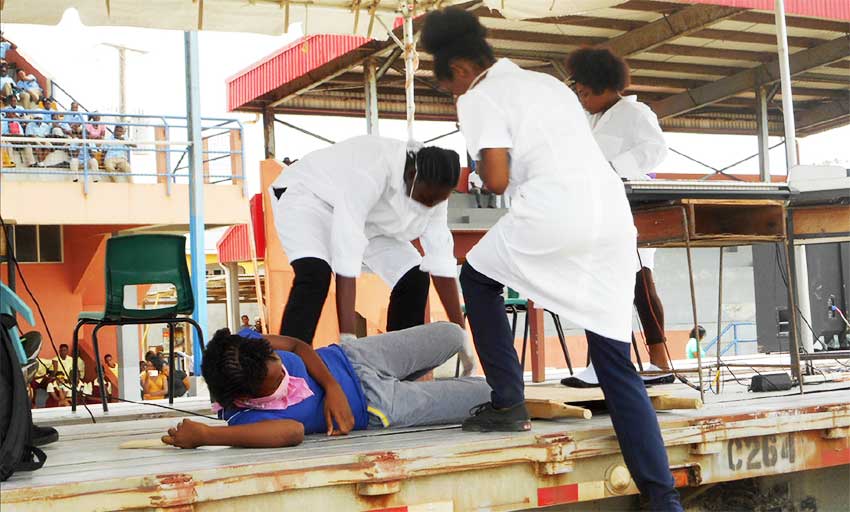 IT was truly a sight to behold in Vieux Fort earlier this week when the Community Relations Branch (CRB) of the Royal St. Lucia Police Force held a talent exposé where students from various secondary schools in the south belted out their artistic abilities in an impressive fashion.

The Soufriere Comprehensive Secondary School, in particular, created quite a spectacle, leaving the audience in awe with their sterling presentation. Their vocalist, Manasseh Stanislas, stole the show with his excellent rendition of the song, “All of Me”, sung by John Legend and a reggae, which some thought was music from a compact disc (CD) when he began singing the song.

The schools highlighted issues affecting young people in song and drama, such as crime and ghetto life, and the need for parental supervision. There were also performances from the Laborie Steel band.

The theme of the event at which the students were showered with words of inspiration from youthful speakers, Kendal Elva (Youth of the Year 2016 and Ajani Lebourne) was “Breaking the Chain of Destruction”.

The speakers and the drama groups used songs from Jamaican reggae artists Jah Cure and Gyptian to convey positive messages to help young people break the chain of destruction.

In his address, Lebourne told the students to see themselves as agents of change and start doing things for themselves and use their abilities to inspire others.

“Stand out…we can’t sit back and allow the powers that be to do everything for us,” he said.

Lebourne urged the students to have confidence in themselves and harness their skills and abilities by using everyone around them.

“Look for a mentor, a family, or friend to help build you,” he added.

He also called on the students to make positive use of social media and not for negativity which leads to the destruction of lives and families.

Elva, in his address, emphasized that we were living in challenging times and called on the youth not to be daunted by the challenges ahead.

“Young people, we are living in some difficult times…hard times. The challenges you face may come in different forms,” Elva said.

He told the students that despite their background or who they were, they have the potential to be successful and that they should strive towards that.

“Don’t let people determine who you are. People sometimes have their own agenda…They may not like the way you walk, dress…but don’t let that deter you. Don’t try to act like the other person,” he advised the students.

He said that as a probation officer, he had come across a number of people who were experiencing challenges and seeking help to deal with them. He described their situation as “sad”.

Elva said suicide was on the rise which, in some cases, is as a result of people’s attitude towards others.

Acting Corporal Flavius of the Community Relations Branch, in an interview with The VOICE, said she was satisfied with the outcome of the event, adding that the branch hopes to make it an annual affair.

“Because of the issues we face in different schools, we decided to hold a talent exposé to explore the talent of the students rather than them just using it for negativity,” Flavius said.

She added the department wants the students to understand that their job is not only to arrest but to bring people together.