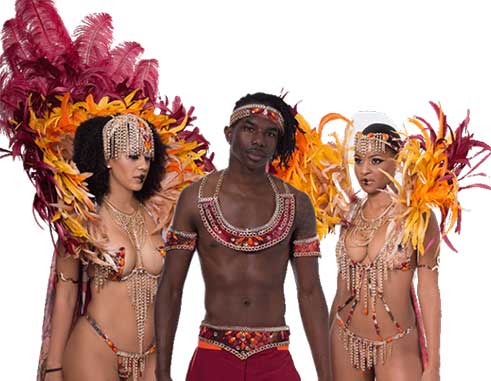 FOR some, our local carnival has been about an expression of freedom; an opportunity for protestation or commentary on the socio-political landscape. Fuzion, however, envisions their contribution to the cultural landscape as an ode to their forefathers; preserving it ideals of pageantry, spectacle and storytelling, without neglecting their responsibility to cater to the unique desires of each reveller and spectator. This is what the band embodies – the amalgamation of traditional and modern sensibilities.

Complementing the existing carnival product, Fuzion Mas launched its portrayal for Saint Lucia Carnival 2017 – “Greatness in the Sands”. Designers Shawn Dhanraj, NakitaHyatali and Sabrina Seurio from Trinidad, alongside our very own, Jesse Mitchell produced costumes inspired by the pyramids of Giza, the ethereal sunset that invokes the presence of Gods and the mummies whose embalmed history, tells a thousand stories. Anticipating approximately 300 revellers, the small to medium-sized band, launched four (4) sections: Khamsin, El Maa, Desert Night and Colours of the Gods, all of which have multiple options, catering to varying preferences.

“We believe every individual has a place in our band, as we are a band of inclusion. Our priority is to ultimately create a unique, secure, cultural atmosphere for revellers, with a product so exclusive, it seems tailored to every individual’s preferences. Through exemplary service, attractive costumes and a contagious vibe, our team is excited to offer something different for Saint Lucia Carnival!” says a Fuzion team member.

As the fully all-inclusive band embarks on this new journey, Fuzion Mas reaffirms its commitment to developing the arts, delivering beautiful costumes accompanied by premium service and amenities, ultimately offering an exceptional island carnival experience for its revellers!