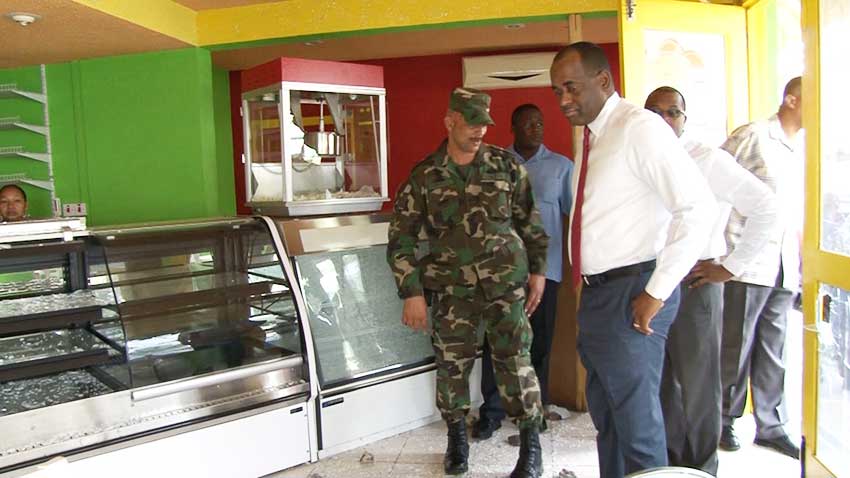 ROSEAU, Dominica, Feb 8, CMC – The main opposition United Workers Party (UWP) Wednesday condemned the “violence and vandalism” in the capital on Tuesday night and denied that it played any role in getting protesters to set fires and loot several buildings.

“Today we say, the United Workers Party condemns the acts of violence and vandalism that erupted in the streets of Roseau during the evening of February 7, 2017 causing widespread loss and damages to business enterprises and triggering fears for safety and security in a season of heightened tension in our practice of civility,” UWP leader Lennox Linton said in an address posted on his Facebook page.

Linton said that he had returned to the capital on Tuesday night in a bid to end the disturbances and that his life and that of his wife and children had been threatened.

“The leadership of the United Workers Party was being blamed on the grounds that the disorder resulted from a public meeting…earlier in the day calling for the resignation of Prime Minister Roosevelt Skerrit.

“Both events are un-related and we condemn these baseless criticisms as forcefully as we condemn the lawlessness visited upon the capital on Tuesday night. For the avoidance of doubt the public meeting ended hours before the violence and vandalism,” he said.

National Security Minister Rayburn Blackmoore Wednesday praised the police for their “high degree of tolerance” after they used tear gas to disperse opposition supporters who had taken to the streets on Tuesday calling for the resignation of Skerrit.

“The Police Force demonstrated the highest degree of constraint and diligence and managed to stabilise the situation using reasonable force in the circumstances. They did not respond with deadly force,” Blackmoore said in a broadcast on the state-owned DBS radio.

“I have been advised by the police that a number of persons have been arrested including a man with a nine millimetre firearm. Investigations are continuing and I have been advised that the police will do an assessment of the situation with a view of embarking on all the necessary steps to maintain law and order in this beautiful country,” Blackmoore added.

The police on Tuesday night fired tear gas to disperse the protestors who had earlier marched to the Financial Center, where the office of the Prime Minister Roosevelt Skerrit is located, demanding his resignation as well as his entire Cabinet.

The police had earlier given the UWP until 3.00 p.m (local time) to end the protest march, but UWP leader Linton had made it clear that they would not be keeping to the police deadline.

But in his broadcast, Wednesday, Linton said there were people “who saw and used the meeting as cover to engineer disorder and destruction to embarrass the UWP”.

He said they owed it to themselves and “a deeply concerned nation to speak truth, the whole truth and nothing but the truth because that is precisely what will set us free.

“We urge the citizens of Dominica to be calm, we urge the leadership of the political parties, civil society and law enforcement to meet in emergency session to agree on a national plan for the restoration and maintenance of peace and order.”

Linton said that the UWP leadership would be meeting in emergency session on Wednesday “to review what happened and to look at where we go from here.

“We stand ready to partner with government, with law enforcement, with civil society in order to figure out how did we get to this and how do we move on from here,” he said, adding that what occurred on Tuesday night “was really unfortunate”.

Linton insisted that the two events of Tuesday should not be tied together adding that the police “must speak to” the number of things that occurred between the time the meeting ended and the violence started.

Prime Minister Skerrit is due to address the nation later on Wednesday.

Linton had during his address to the supporters accused the police of invoking “unlawful authority in their attempt to demand that our meeting should start at a certain time and it should end at a certain time. They have no such legal authority.

“And if we are going to be a rule of law country then the police must learn to live by the rule of law and the rule of law in this country says we do not need permission to have a public meeting,” Linton said, noting that former prime minister Edison James had read the relevant sections of the Constitution.

Blackmoore said that he wanted to assure the public that “they should go about their business normally including school children, while exercising utmost caution.”

In his broadcast Blackmoore said the responsibility for this “diabolical and criminal act are at the feet, mouth and hands at the leadership of the United Workers Party and its operatives.

“Such vicious acts are totally unacceptable and I call on the churches and all concerned citizens to condemn those attacks,” he said, telling citizens that Prime Minister Skerrit and his family “are safe”.

The UWP, which had dubbed Tuesday protest as “D-Day” had called on Skerrit to step down as the party continues its campaign against the controversial Citizenship by Investment Programme (CBI).

Under the CBI, Dominica like several Caribbean Community (CARICOM) countries offer foreign investors citizenship in exchange for a significant investment in the socio-economic development of the country.

Last month, Skerrit and the Dominica government denied that the head of government was under investigations in the United States following the arrest of an Iranian national, who had in the past been the holder of a Dominican diplomatic passport.

Social media reports had claimed that an un-named US agency was investigating Skerrit in relation to Iranian Ali Reza ZibaHalatMonfared, who was detained in Iran’s biggest fraud case and had earlier been given a diplomatic passport by Dominica..

Prime Minister Skerrit has already instructed his lawyers to pursue legal action against Linton over remarks made in regards to the issue.