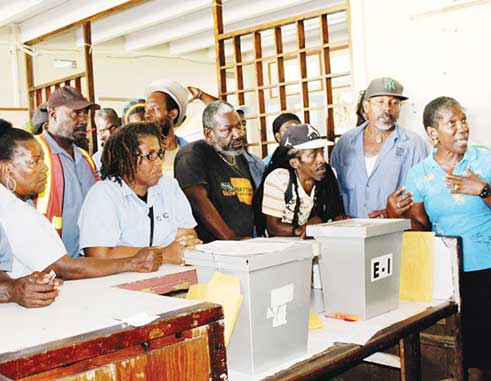 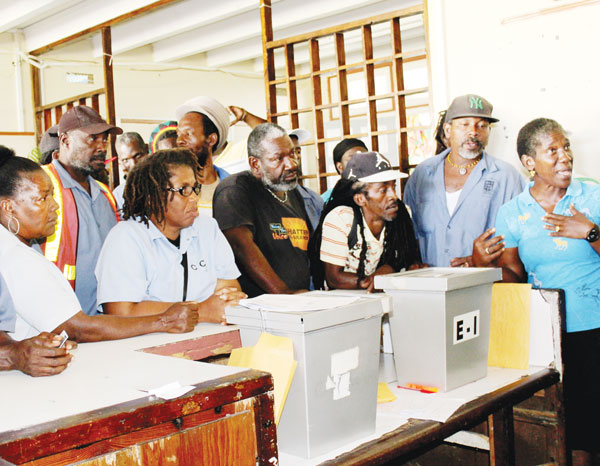 THE National Workers Union and the Seamen, Waterfront and General Workers Trade Union are in a recognition battle over employees of the Castries Constituency Council (CCC).

The battle, which started with the filing of a petition by the workers to the Labour Department for a secret poll to determine which trade union will be their bargaining agent, ended last Friday on the ground floor of the Castries City Hall when workers voted by secret ballot.

Employees dropped their ballots inside the two ballot boxes monitored by representatives of the Labour Department.

About 150 employees were said to have voted in this de-certification exercise carried out by the Labour Department. (See Picture)

The few employees The VOICE spoke with Friday appeared dissatisfied with the representation of the Seamen’s Union for one reason or another while others had no opinion to offer but went through the exercise nonetheless. However the atmosphere Friday morning at the City Hall gave the impression that the NWU was pretty much in the driving seat and soon will be announced as the official bargaining agent of the CCC workers.

Should the votes go the way of the NWU, the next step will be the revocation of the Seamen’s Union recognition certification by the Labour Department. This would mean that the CCC workers would then be without a bargaining agent hereby paving the way for the NWU to apply to the Labour Department to fill that slot.

The VOICE learned that CCC workers petitioned the Labour Department about two months ago for the de-certification exercise.