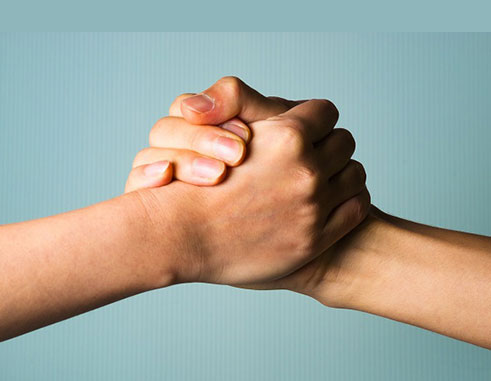 PERMANENT Secretary in the Ministry of Social Justice, Donovan Williams has come out in support of the Department of his Ministry, which has been hammered repeatedly by the almost four year-old non- government organization ‘Raise Your Voice’ for alleged slackness in dealing with issues relating to women and children.

Williams, who attended the launch of a grant to the NGO by the British High Commission to Barbados and the Eastern Caribbean and a two-day training for front line social service agency employees last week, says that the department’s back is broad and can take the hammering.

Yet at the same time he spoke highly of the raise Your Voice which has made its presence felt in the country since its founding in February 2013.

“Our backs are broad, we can take that. They (Raise Your Voice) is an organization of action, tangible action,” Williams said.

Since its founding, Raise Your Voice has been advocating primarily on behalf of the vulnerable women and children who are victims of violence. It has become a leading social agency in the forefront of women and child advocacy.

Its almost four years of existence is laced with achievements from providing families and individuals who are victims of violence with counselling and moral and legal support in the courts, to securing a perpetual donation of medicines and medical supplies from AmeriCares working in partnership with St. Jude Hospital and the Procurement Unit of the Ministry of Health for use at all public health facilities, to presently undertaking an ambitious project to raise funds to establish a Rape Crisis Center for St. Lucia.

The group’s tough talking but action-oriented approach to dealing with issues involving women and children seems to have endeared it to the Ministry as Williams spoke of his Ministry’s recognition of the need for partnerships and collaboration in the fight against the social ills confronting the country.

“Being a social service agency is a lonely place. We have to provide, support a range of services and programmes that include, foster care adoption, mediation, child protection related to investigations, preparation of various inquiry reports for the courts. In some instances an individual officer has a case load of 50 – 60. That’s our reality. That’s the challenges we have,” Williams said.

To Williams, joining forces with ‘Raise Your Voice’ is all about ensuring that the social issues and challenges confronting the country are minimized. He believes that dealing with these issues requires concrete action.

“It does appear that the wind of change and the will to change is upon us,” he added, admitting that the social malady confronting the country is both frightening and challenging.

Warning that it would take some time to address the condition that is decaying the country’s social fabric, Williams said “We have been making strides (and) there are things that are happening that give a lot of comfort to us in terms of being able to address.

“Our realities are very stark and real. We have a staff complement of 11 family case workers, two intake social workers, one senior field social worker and a director. At times it seems that not even the government is on your side,” Williams said.

The next step for the Ministry is the establishment of a new platform for the delivery of social services in the country. Discussions on this are ongoing, according to Williams.