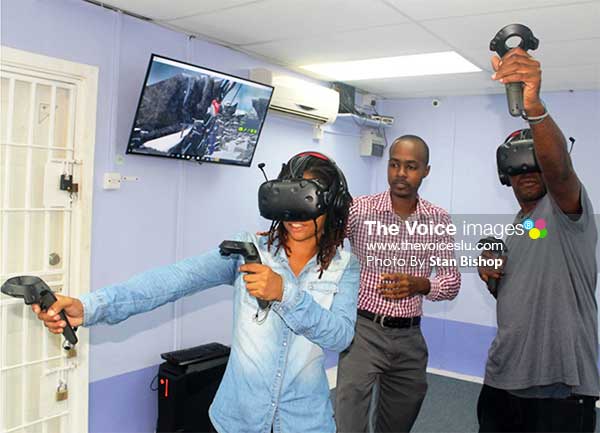 THIRTY-YEAR-OLD Jano James is another addition to the growing number of entrepreneurs bold enough to not carry all their business workload in one portfolio. Having grown up with the philosophy that true financial freedom comes from owning one’s business inculcated in him by his parents, James is gradually making each of his business dreams a reality.

Earlier this month, James opened the doors to his new business, VRcade, which, he says, is the first and only fully interactive virtual reality arcade in Saint Lucia. Located along the lane between the Voyager and Y. de Lima stores on William Peter Boulevard in Castries, it currently boasts close to 40 different virtual reality experiences in which patrons can participate.

“Virtual reality (VR) entails putting on some headsets and, through the use of hand-held controllers, one can enter other worlds and enjoy mesmerizing experiences. It is fully immersive and fools the senses, including the fact that one can actually forget that one is still in the arcade. It’s very realistic,” James explained.

James, a graduate from St. Mary’s College, said VRcade has something for everyone that also suits their pockets and carries a wide range of educational, action, fantasy, horror, adventure and other exciting games. The arcade’s catalogue is also updated daily as new experiences are released. While he is delighted about the positive feedback from gamers, he said he was surprised to learn that not too many people knew about VR.

“To my surprise, not many Saint Lucians knew that VR existed let alone that it existed locally,” James said. “Some people are tentative at first but after taking a free trial run, they literally get hooked.”

James foresees being able to use the VR experience to enhance Saint Lucia’s tourism. In that vein, he hopes to get special VR cameras that will film different parts of Saint Lucia to create VR experiences. VRcade currently has games that allow patrons to navigate any part of the world and adding Saint Lucia to that list, he said, would be a game-changer.

VRcade is James’ second business venture, the other being his IT services and solutions company called Executive Solutions, which was formed nearly four years ago. Wanting to branch out, he decided to open VRcade after realizing that it was the wave of the future in gaming.

However, while VR has been around for many years now, it was not at such a consumer level and realistic enough to be marketed back then. He said waited until it reached the point where that reality changed in his favour and seized on the opportunity. But there was one more hurdle to cross.

“It was a tough battle trying to get funding for a start-up business, especially in the current dismal business climate,” James lamented. “It was even more difficult convincing bankers to lend money for a business venture that they knew virtually nothing about. So I’ve had my headaches and sleepless nights.”

James did not initially get the financing from the banks he approached, so he was forced to think outside the box, resulting in him getting multiple sources of funding from different financial institutions. Despite presenting a proper business plan to these institutions, it seemed pointless, he said. But he feels a sense of vindication having laboured so much to see his virtual dream become a reality.

“I’m proud of what VRcade has been able to achieve thus far, especially the satisfied customers who return for our service,” James said.

Aside from the VR experience, patrons can also make use of the regular console gaming available. However, James said that while VRcade offers a full arcade experience, the main focus is on virtual reality. James said one of the future goals of VRcade is to bring the virtual reality experience to indoor social events such as parties, weddings and more.

While some games might not be suitable for some patrons, especially those who are squeamish, James said every precaution is taken to ensure patron safety.

“We ensure safety at all times at the arcade,” James assured. “So our attendants are always on the lookout to ensure that patrons are under excellent supervision. If ever they feel too overwhelmed, we step in and calm them down and suggest something milder.”