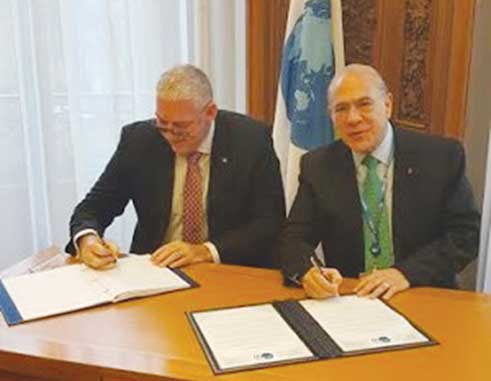 PARIS (CMC) – St. Lucia has signed the Convention on Mutual Administrative Assistance in Tax Matters that will enable the government to automatically exchange information.

A St. Lucia government statement said Tuesday that the multilateral instrument, which will enter into force in 2018, is the most comprehensive mechanism available for all forms of tax cooperation and will tackle tax evasion and tax avoidance, making it a top priority for all countries.

“Despite our many challenges we stand resolute, with the rest of the world, to address vital issues such as tax avoidance and evasion. Having signed the Multilateral Competent Authority Agreement (MCAA) in October 2015, we have continued to work assiduously towards the signing of this Convention and towards the development of enabling legislation,” Prime Minister and Minister of Finance Allen Chastanet said at the signing ceremony.

“We have received assistance from the Global forum and OECD Secretariats in this regard, and indeed we are grateful. The necessary legislation has already been drafted and will be enacted in time for the due diligence process to begin in January 2017.”

The Prime Minister explained that following the first Foreign Account Tax Compliance Act (FATCA) reporting period, the learning curve for the implementation of the Common Reporting Standard (CRS) is envisaged to be significantly reduced.

“The task ahead is by no means an easy feat. We have apprised the stakeholders in the financial sector of the Common Reporting Standard, but there is still significant ground work to cover,” he said.

Since 2009 the G20 has consistently encouraged countries to sign the Convention which has been opened for signature from 2011. This cooperation ranges from the exchange of information to the recovery of foreign tax claims.

Chastanet said that St. Lucia has heeded the call of the global community with respect to the exchange of information.

“It has not always been an easy journey as there are onerous costs associated with the implementation of international standards; and at times we have had to take unpopular decisions, for the greater good. Let this signing be a testament to our continued commitment to meet globally acceptable standards on transparency and exchange of information for tax purposes,” he said.

The Convention was developed jointly by the Organization of Economic Cooperation and Development (OECD) in 1988 and was amended by Protocol in 2010.