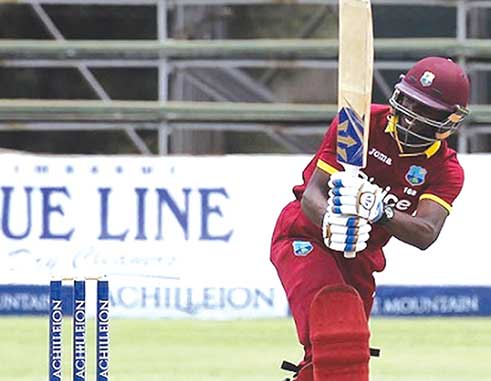 Beaten By Zimbabwe on D/L.

BULAWAYO, Zimbabwe, Nov 25, CMC – West Indies were dumped from the Tri-Nations Series here Friday after rain, combined with careless cricket, condemned them to a shocking five-run loss to Zimbabwe under Duckworth/Lewis in a must-win contest.

Chasing a modest 219 at Queens Sports Club for a place in Sunday’s final against Sri Lanka, West Indies slumped to 93 for five in the 23rd over, as they failed to cope with left-arm spinners Sean Williams (2-18) and TendaiChisoro (2-23). 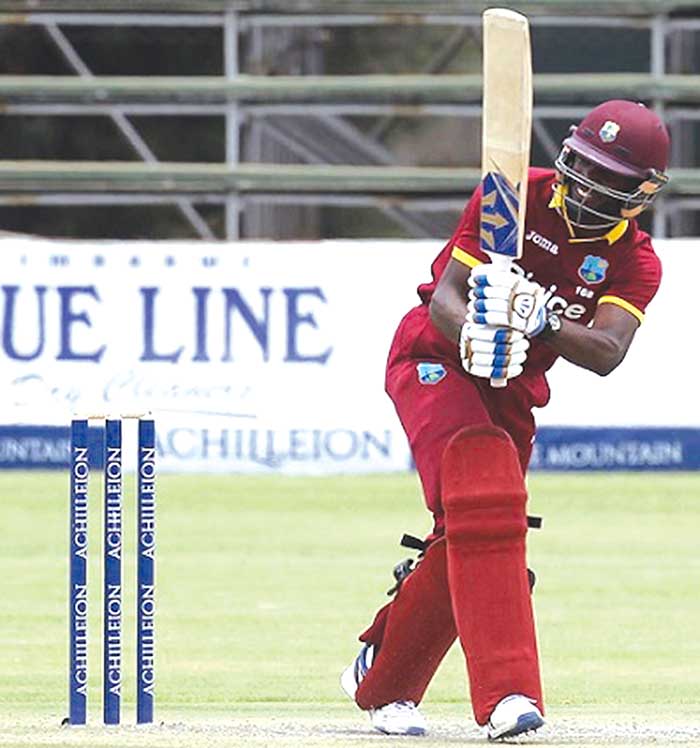 When the rains finally arrived mid-way during the 28th over, West Indies were 124 for five but unfortunately short of the 130 runs required under the Duckworth/Lewis system.

Left-hander Jonathan Carter was unbeaten on 43 and captain Jason Holder, 22, while opener Kraigg Brathwaite chipped in with 24 earlier.

The Caribbean side’s sloppiness had earlier cost them dearly when they allowed the hosts to recover from 127 for eight in the 37th over, to reach 218 for eight off their allotted 49 overs.

Off-spinner Ashley Nurse claimed three for 27 in a brilliant 10-over spell and leg-spinner DevendraBishoo picked up three for 30 in his first game, to wreck the innings after Zimbabwe opted to bat.

But Sikandar Raza produced a superb unbeaten 76 and found an ally in Chisoro, who struck a career-best 42 not out as they defied the Windies in a fabulous, record 91-run, unbroken stand for the ninth wicket.

The result meant Zimbabwe finished second in the standings on eight points, just one ahead of the Windies who will rue the narrow results in their two last outings when they tied with the Zimbabweans last Saturday and then lost by one run to Sri Lanka four days later.

West Indies were on top from as early as the fourth over when ChamuChibhabha, in his 100th One-Day International, played across a full length delivery from seamer Holder and was comprehensively bowled for nine with the score on 18.

Masakadza and opener Brian Chari (19) put on 30 for the second wicket to steady the innings but the promising stand was broken in the first over following a near hour-long break for rain when Bishoo bowled Masakadza with a yorker length delivery.

Nurse and Bishoo then scythed through the innings accounting for the next five wickets to fall for 30 runs, as Zimbabwe tumbled to 89 for seven in the 26th over.

Under pressure, Sikandar anchored the first of two key stands to give Zimbabwe hope, putting on 38 for the eighth wicket with Donald Tiripano who made 15.

Still confident of chasing their smallest target of the tournament, West Indies were set back in the opening over when out-of-form Johnson Charles chipped a simple return catch to Chisoro off the first ball he faced, to depart with just one run on the board.

His opening partner Evin Lewis, a century-maker in the last game against Sri Lanka, followed in the next over lbw to Chisoro for nine playing back and when Shai Hope (14) edged a drive at a wide delivery from Williams to Masakadza at slip, West Indies were stumbling badly at 35 for three in the 10th over.

Carter and Brathwaite combined in a 30-run, fourth wicket partnership which seemed to put West Indies run chase back on track.

It ended disastrously, however, when Craig Ervine at cover conjured up a direct hit at the striker’s end to find Brathwaite well short of his ground as the batsman gambled on a quick single with Carter in the 18th over.

Carter, let off on 32 by wicketkeeper Peter Moor of Williams in the 23rd over, kept the scoreboard ticking over with boundaries off leg-spinner Graeme Cremer and Sikander’s off-spin. Holder entered with a sense of urgency and gathered three boundaries off seamer Chris Mpofu’s second over which leaked 12 runs before clearing the ropes back overhead in the bowler’s next over.

But West Indies could only garner seven runs off the last nine deliveries of the game before rain shattered their hopes of a berth in the championship contest.