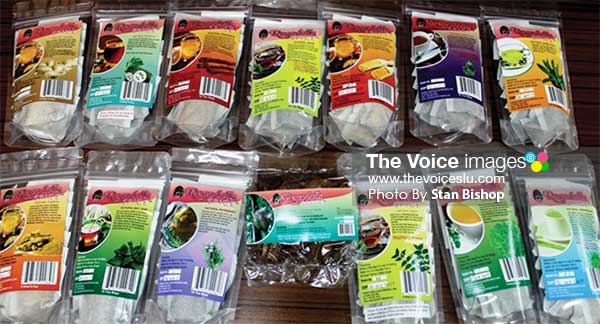 In three weeks’ time, several Saint Lucian and Taiwanese companies will be showcasing their wares and services at the 9th annual Saint Lucia-Taiwan Partnership Trade Show to be held at Johnsons Centre in Rodney Bay.

The November 25-27 event has among its primary objectives fostering deeper trade ties between the two countries which first established diplomatic relations in 1984. Since it was first held in 2008, the trade show has increased in both the number of participants and the public’s interest. Last year, 6 Taiwanese and 54 Saint Lucian companies participated in the exhibition, a far cry from the handful of companies at the inaugural event.

Janitha Regobert, owner of Regodolls Spice, is one of the new businesses participating in the trade show for the first time. Regobert’s business started about 15 years ago when she took up the hobby of dressing up dolls with ribbons. She recently began using dried leaves from various trees, including mango, bamboo, soursop and banana, and sometimes uses madras to add an extra layer.

She still has all the dolls at home despite many people encouraging her to sell them. However, she admits that she is not ready to let go of them just yet.

Earlier this year, however, Regobert’s ambitious and industrious spirit continued to brew and she decided to begin her own line of teas using herbs and spices, many of which are readily available in her home garden.

She ordered 100 sachets online to kick-start her tea business. She began packaging her teas using soursop, turmeric and ginger as the initial flavours. After handing out samples to her friends and getting positive feedback, she ordered another 200 sachets, adding other local herbs and spices to her line of teas.

As business continued to improve, she began ordering plastic sachets from a local company in which she would package 15 tea bags each. Soon after, she designed her labels and got them printed locally.

Today, her tea collection stands at 13 flavours, including neem, cinnamon, bay leaf, rosemary, moringa, lion’s ear, shadobeni and lemongrass. She currently packages about 5,000 sachets and her teas are marketed through a major local supermarket chain. Her teas, she said, are individually packaged and meet the highest standards of quality. They are not the average cup of tea, either, she affirmed, as a great deal of soul goes into producing each tea bag.

Regobert said she is anxiously looking forward to participating in this year’s Saint Lucia-Taiwan Partnership Trade Exhibition. The opportunity will place her face to face with other small businesses with whom she can network and share ideas. She is also hoping to expand her business by hiring more hands to meet demand. However, finding committed people for that kind of work, she said, is a daunting task.

“Many people are lazy nowadays. I’m a very industrious and creative person,” she said. “I’m always coming up with new ideas. To me, time is very precious, so I would not want to waste it. Time is money.”

Her advice to anyone considering getting into business is to weigh all the options first and be committed to facing and overcoming the challenges that will show up.

“There is work out there but it’s just that everyone has a different mindset,” Regobert said. “Something that would seem easy for me to do might seem difficult. In business, people need to be strong and be willing to persevere. If you don’t have those qualities, don’t go into business. Anything I do, I do it with a passion.”