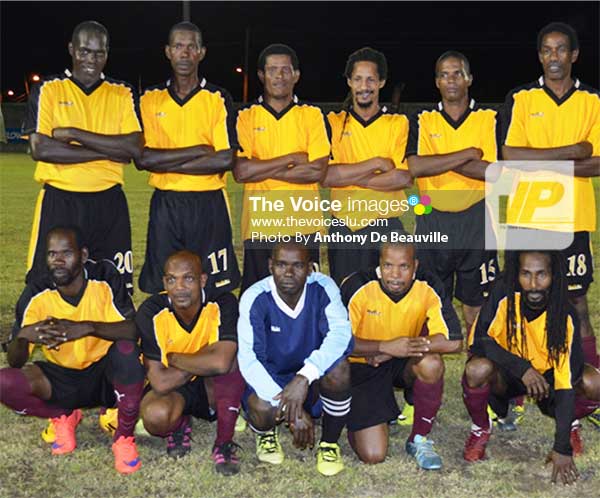 SEVENTEEN goals were scored in six games last weekend in Veterans In Sports Inc Football Tournament played at the Phillip Marcellin Grounds in Vieux Fort in front of appreciative crowds.

The highlight was the tournament’s fourth hat-trick scored by VSADC’s Guy Jn Baptiste versus Behind the College All Stars. Defending champions Soufriere edged out Vieux Fort South 2 – 1, Micoud had a similar margin of victory over Dennery and FLOW Lancers played to a goalless draw with Congorians.

Lancers with 4 points will now have to wait for the outcome of the match between VSADC on 6 points and Congorians on 2 points to decide who goes forward. The two teams will clash this coming Sunday at the Sab Sporting Facility from 4:00 p.m.

In Game one, played on Saturday VSADC defeated Behind the College All Stars 4 – 1. The goal scorers for VSADC were Trevor Anderson in the 6th minute and Jn Baptiste a hat – trick with goals in the 48th., 66th. and 69th minutes of play.

In Game two, Valley Legends breezed past Laborie 3 – 0, despite Laborie’s fighting efforts in what can best be described as their best game in this year’s tournament.

For Valley Legends the goal scorers were Lloyd Clifford in the 13th minute, Layton Sandiford in the 54th minute and HermusSt.Ange in the 68th minute.

On Sunday, in game one FLOW Lancers FC and Congorians played to a goalless draw. Both teams will have themselves to blame for not putting the many scoring opportunities offered to them in front of goal.

In game two, Micoud should count their blessings and give thanks to the Dennery team for not scoring the 10 opportunities that they had throughout the 90 minutes of play. Micoud took the lead in the 66th minute when a Martin Shortie strike inside the 6 yard box eluded the Dennery goalkeeper and went onto win the match 1-0.

In the final game on the night card, defending champions Soufriere silenced the home crowd when a Jerome Serville strike in the 88th minute put the issue beyond doubt. For Vieux Fort South Douglas Marcellin opened the scoring in the 15th minute with a thundering right foot shot that eluded the Soufriere goalkeeper. David Ramjuwern equalized for Soufriere in the 66th minute of play.