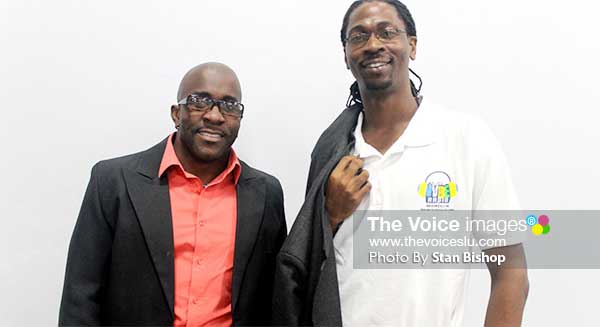 Sponsored | Article continues below
Share this post:
WITH over 20 radio stations already competing for the ever-shrinking advertising dollar, one would have to be crazy to start up a new one. But two former Radio Caribbean International (RCI) employees say they are out to prove that being different makes all the difference in business.

The station, located in the Tile World building at Bois d’Orange, opened for business on April 1 this year and its short list of programmes includes an amazing gospel programme on Saturdays, the popular adult-themed programme, “Situations”, on Tuesday evenings and the morning programme,“Real Talk”, which airs from Monday to Friday. One of the new station’s hallmarks is that only music performed and/or produced by Saint Lucians is played on Thursdays.

Since hitting the airwaves, Vybe Radio has become an instant hit with listeners as well as on Facebook where some of their programmes are streamed live. Griffith said that kind of interactivity is expected to evolve into something even bigger. Aside from building a wider listenership, Griffith said the emphasis is on building relationships with sponsors and supporters.

“It was very difficult starting off,” Griffith, known in soca music circles as Superman HD, said. “It wasn’t something that was easy to do and it’s still not easy. But from the love we’ve been receiving thus far, it can only get better because we have a lot more in store for Saint Lucia. I like to refer to my co-workers as the ‘Dream Team of Radio’. They’re innovative and we use a lot of modern technology, including social media.”

Despite starting off the business on April Fool’s Day, Griffith said a lot of wisdom and prayer went into his latest business idea. He said his previous experience as an on-air personality at RCI also prepped him enough to take up the new challenge. After leaving that station nearly a year ago, he went after getting his own radio license and began funding the entire process from his own pockets after being turned down by banks.

“We decided to climb the mountain ourselves. However, we got a lot of help from many people who saw what we were doing. They were actually offering their services without even wanting compensation. What I’m happy about today is that despite not earning a salary for myself, that our staff and bills are being paid. This in itself is a blessing,” Griffith, also known in radio circles as “Pringles”, said.

Elijah Williams, the station’s Director and Sales Manager, said the station has been making waves way past everyone’s expectations. However, he admitted that when Vybe Radio opened its doors, the original plan had to be tailored.

“We had to make some adjustments. So instead of hiring recognized people to make an immediate impact, we decided to hire people whom we knew were talented but unrecognized, thereby using them to create something new,” Williams said.

Sticking to the theme of wanting to be different, the station recruited young talents such as Kiedel Sonny, two-time Green Synergy winner DJ Yellow, DJ Shelz, DJ ReadyMix and DJ Ratly, so that they could get the opportunity to showcase their talents. So far, the Vybe team consists of nine members. In fact, most of the employees eventually hired approached the station first, Williams said.

Despite the radio station having an all-male cast, Williams said most of their listeners are females. However, the station is hoping to hire a female announcer soon to bring some balance to the studio.

Aside from the abovementioned programmes, Vybe Radio currently airs entertainment news, with local regional news expected to be added to the schedule soon. The station also has a sports programme co-hosted by Gilroy “Ezi” Hall and Michael “Midget” Pierre.

“We aim to bring things across by using a fresher, more diverse approach. It cannot be business as usual because there are already so many radio stations in Saint Lucia. To be competitive, you have to do something that the others are not doing and also be able to sustain it,” Williams said.

Williams, who previously worked as a sales manager at RCI, admitted that despite the intense positive feedback the radio station has received thus far, Vybe Radio is still running at about 50% its projected capacity. With other programmes lined up, he believes the radio station is poised for continued success.

“If you have a concept or dream, research it,” Williams advises other entrepreneurs. “Sometimes when we get an idea, we get excited and just jump right into it. But you need to understand what you’re getting into, have a proper strategy, and identify the right personnel to work with. It might be difficult to do, but not impossible.”