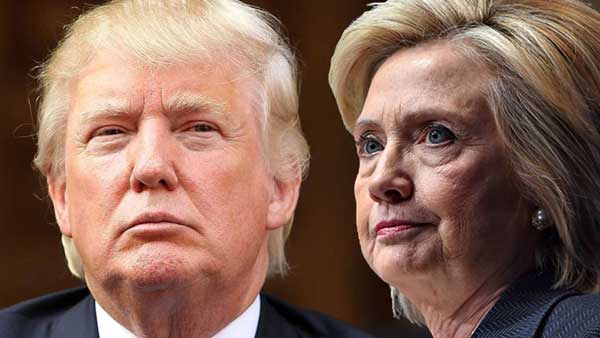 THE United States of America sits amongst the greatest nations on earth and is about to elect its 45th President in seventeen days. She will have quite a job on her hands after a race between two of the most despised and mistrusted candidates there have ever been. One is alleged to have risked national security and the other is accused of mass sexual assault, one wants to be popular and one wants to be powerful. It’s a terrible choice for America.

The “Land of the Free and the home of the Brave” encapsulated the aspirations of a new people and a young nation yearning for self-determination when they were written two hundred and three years ago. But scratch the surface and things were more complicated than these rousing words of 1814 demand. The sentiment has been more difficult to deliver and for many it still remains elusive. Some of the legacies created during the term of the first American President, George Washington, in 1798 remain unresolved to this day.

The author of the Star Spangled Banner, Francis Scott Key, President Jackson’s District Attorney for the City of Washington, was a notorious racist and a prominent member of Maryland’s slave-holding aristocracy. For all the fine words, set to music in this patriotic song, he remained a sharp opponent of the anti-slavery movement until he died in January 1843.

Some 67 years before he breathed his last, he, along with the other inhabitants of the 13 American colonies were witness to an historic happening. On 4th July 1776, at 6:26pm to be precise, the third draft of the American Declaration of Independence was signed. It was created for the purpose of an “assertion of certain natural and legal rights” and the American people still depend on this founding charter to this day. But the final document had been amended to remove any reference to the denunciation of slavery and the slave trade, as well as a hostile reference to English people. With these changes made, the United States of America came into existence. But it was only within the life-time of the current President that segregation in America was finally abolished.

It was not until 1837, with the election of Martin Van Buren, that the US had its first president who was a citizen by birth. He was the eighth president of the United States, since which time every President has been born on American soil, despite Donald Trump’s meandering explanation of why he propagates the birther accusations against Barack Obama, even after that president released his own birth certificate.

But no nation has a perfect past and most have dark chapters. Cotton-candy history is not an American invention, even if cotton candy is; – conceived by a dentist without any sense of irony. It’s true, that for all its imperfections, America today is one of the key guardians of global liberty and so it’s important.

The second US presidential debate on October 9th at the Washington University in St Louis, Missouri was a defining moment for Trump, it was the beginning of the end and it was a depressing spectacle, the essence of American democracy was being mocked. The two oldest and most unpopular candidates ever to run battled it out in the most acrimonious live debate in television history, they spat accusations against a backdrop of lurid allegations over the treatment of women.

Trump went into that arena with senior Republicans already urging him to quit over his lewd and sexist tape recordings; sixteen Republican senators had already withdrawn support with a string of Governors joining later that evening. But Trump countered with rape allegations. Trump’s message was I may be bad but Bill Clinton was worse. Few, however care about Bill Clinton, he is not running for President.

So the penultimate debate provided the perfect setting for a bar-fight and as anticipated it was low and shocking – mud was slung and we were left with the impression that the more money spent on an American election campaign the worse the candidates on offer. But no matter how much is disbursed on propaganda a monkey in silk is still a monkey.

Now the chasm between the Republican leadership and the grass-roots who support Donald Trump has grown wider. The establishment is on the run and Trump has effectively become an independent with his party having given up on the White House altogether and opting for damage limitation.

Senior Republicans feared that Trump’s campaign was putting the Party’s control of the Senate in jeopardy. A cataclysmic meltdown could even cost them the House of Representatives. On October 10 the House Speaker Paul Ryan signalled the abandonment of Trump by confirming that he will no longer defend the GOP nominee, using those 29 days to polling to focus the Party’s hold on Congress.

A smart move given that there are a lot of strong Republican contenders for the Senate and a significant number of weak Democrats. Clinton, is less dangerous for America and the rest of the world than Trump. Paul Ryan is banking on a split-ticket vote; that people will reluctantly elect Clinton but refuse to give her a blank cheque by keeping both houses under Republican control.

A Clinton presidency and a Democratic Senate majority is the stuff of nightmares for the Republican establishment and it’s why they have had to throw Trump under the bus, not least with a Supreme Court seat up for grabs following the death of the conservative justice Antonin Scalia in February. But Mrs Clinton is also more likely than any other president entering office to face impeachment, it will only be a matter of opportunity before the Republicans make a move.

Clinton has never reached out beyond her core supporters and is prickly and career obsessed. She turns a blind eye to almost anything that impedes her ultimate goal. Trump on the other hand has switched tack and returned to play the underdog as his last hope of stirring the disaffected as an act of mass defiance against the establishment. But with the Republican establishment itself abandoning him he no longer has the Party machine or the feet on the ground needed to get-out-the-vote.

Trump will not win the magical 270 electoral endorsements he needs except through an unprecedented low turn-out among swing voters. But the now inevitable conclusion of this election will not be enough to deliver a clear run while in office for the woman who will become America’s least popular leader ever. With her double-digit advantage growing her supporters have contracted a dangerous form of optimism, but there will be no honeymoon for President Clinton who will spend the next four years under attack and answering questions.

One hundred years since women in America were finally given the right to vote one will now be sworn in to the top job. But Senator Tim Kaine of Virginia, the Democrat’s Vice-Presidential candidate is the man to watch if America’s first woman President falls while in office.

John Kennedy is President of the British Caribbean Chamber of Commerce Saint Lucia and CEO of Boka Group. The views expressed in this Column are his personal views.