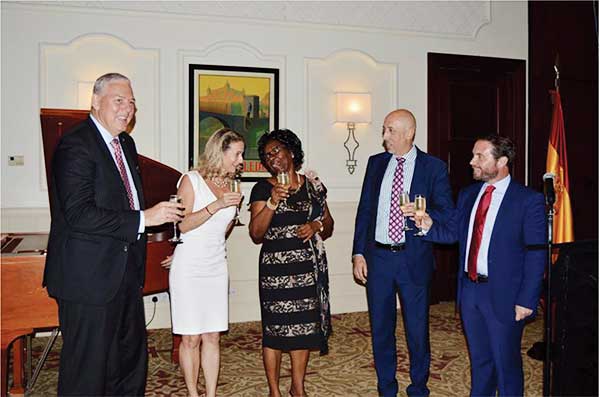 THE Embassy of Spain in Saint Lucia celebrated the National Day last Tuesday with a reception hosted by the Spanish Ambassador, José MaríaFernándezLópez de Turiso, at the Sandals Grande Resort.

During the event, the acclaimed Spanish baritone, Luis Llaneza sang traditional Spanish and Latin American songs, accompanied by the piano of the local artist Jardè Pierre.

Governor General, Dame PearletteLouisy, Prime Minister Allen Chastanet, Sir Derek Walcott and representatives of the diplomatic corps and the Spanish community in Saint Lucia attended the event that was the first one of a series of cultural and social activities to celebrate the 30th. anniversary of diplomatic relations between Spain and St. Lucia.

These activities will be continuing on November 22 with the concert of the acclaimed Jazz- Flamenco band of Jorge Pardo, one of the most anticipated cultural event for this month in Saint Lucia.

The Spanish Ambassador emphasized that since 1986, both countries have maintained a cordial relationship, being further strengthened in the past year by the opening of the Permanent Representation of Spain in Castries. The Ambassador noted that Spain intends to continue strengthening its ties with St. Lucia, through the development of new avenues of cooperation in matters such as tourism, renewable energy, or the development of infrastructure, all fields in which Spain´s leadership are recognized globally.