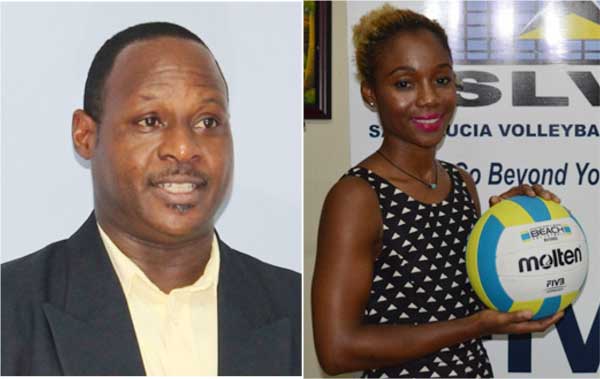 AS day two of the 10th stage of the NORCECA Beach Volleyball continues at Pigeon Island, one local female volleyballer is firing back, saying she was not given a fair chance to represent Saint Lucia at the tournament.

The frustrated Kashima Noel said that despite preparing for the tournament, she was informed on Thursday that she was not selected.

She said President of the Saint Lucia Volleyball Association, Brian Louisy, had told her that she and her teammate could have played in the tournament since two female teams were no longer participating.

However, Louisy informed her afterwards that she and her teammate could not participate.

“What is wrong with Saint Lucians for not pushing for their athletes? Or is it that the SLVA President does not have an interest in my beach partner and me representing Saint Lucia?” Noel asked.

She continued: “For us to leave our homes, come down to the hotel with our packed bags, enter a technical meeting and be told that we are not registered and that the President of the association will not allow us to play is wicked!”

Noel added: “I am not one who vents but I am human. Anyone who really knows me know that all I do or have been doing my entire life is train for a tournament I never got to play! For someone to think I am not that good of an athlete to represent my country is Crazy! The passion, respect and loyalty I have for volleyball and Saint Lucia is Crazy! Hard work pays off but when someone in authority does not like you or wants you to reach a certain level all they do is find ways in every single aspect to prevent you from reaching your goal.”

The VOICE spoke to Louisy yesterday about the allegations leveled at him by one of his members. He said he was aware of two foreign teams withdrawing at the last minute, but in an informal conversation with the technical director, it was discussed as to whether a third female team from Saint Lucia can enter, to which he agreed.

“At the technical meeting, and placing the teams in the various pools, we noticed that there were thirteen teams: three groups of three and one group of four, meaning that instead of playing 6 matches, the ladies would end up playing 2, then onto the semifinals and final and the bottom half would be the elimination round.”

Louisy continued: “When the technical director and the tournament director said it’s up to your president at that point, both ladies looked embarrassed as if I was the one not speaking the truth. Clearly, I must admit that I did not communicate the situation early enough to them. The two ladies can rest assured there was nothing of malice on my part nor did I try to deny them an opportunity to represent their country. I must admit that I should have handled the situation differently. Kashima works with me; we have a good working and professional relationship at the Office of the Saint Lucia Chamber of Commerce. I feel really bad (about the situation) and the two ladies are justified as to how they feel. I will apologize to both of them appropriately.”